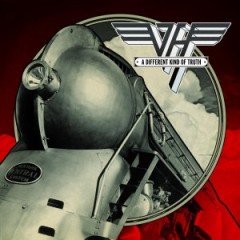 A Different Kind of Truth marks Van Halen’s twelfth studio album and the first one to be made in fourteen years. With David Lee Roth back in the band after 28 years and Wolfgang Van Halen (Eddie’s son) now playing the bass in the band, it definitely feels like family business with few outsiders allowed in. So how does Val Halen’s return album fare?

A Different Kind of Truth is not only a better than expected album, but it’s actually great on its own accord. But I wouldn’t blame anyone for feeling skepticism about the ablum after listening to Tattoo, the album’s first single. While I wouldn’t say it’s a terrible song, the awkward lyrics and pop-friendly feeling stand out differently from the rest of the album. Shortly after Tattoo, Van Halen pulls a bait-and-switch tactic. The album kicks into better gear thanks to the intact dynamic between Eddie and Roth, intense guitar riffs and solos, groovy sounds and improved lyrics.

All the songs from A Different Kind of Truth sound very familiar. After all, they are unreleased demos from the past. While the nostalgia act can go either way, Van Halen’s production values helped polish their songs effectively to make them sound fresh and new (Tattoo, She’s The Woman, Big River) rather than sounding like a lazy band wanting to cash in on its oldest fans. Tracks such as the anthem-esque Blood and Fire and the fast-paced Bullethead are among my favorites.

Overall, A Different Kind of Truth may not be as masterful as Van Halen or 1984, but it works as a great comeback album for Van Halen. David Lee Roth says it best to the fans about their return on Blood and Fire:

Preview on Xiami.com | Like it? Buy it on Amazon | iTunes