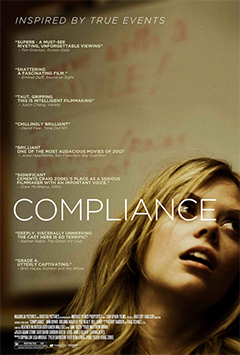 There is a fine line that many films walk, and just a few mistakes could mean falling into the realm of exploitation. Such situations in films often feel isolated and unrealistic, but Compliance presents a reserved yet haunting look at a situation that actually happened.

At the start, Sandra (Dowd), manager at a fast-food restaurant, finds herself under a lot of stress. The fridge was left open the night before, leading to the loss of multiple ingredients, and she just received a phone call from a police officer telling her that one of her employees stole money from a customer. Sandra quickly takes Becky (Walker) to the back and follows the officer’s every instruction. She searches her pockets, strips the girl down and leaves her with only an apron, and she stays on the phone, awaiting the next instruction. As others are brought into the back room, the officer’s instructions become increasingly invasive. Unbeknownst to the victims, the supposed officer is nothing more than a prank caller.

Craig Zobel’s Compliance presents us with events that seem almost impossible to believe actually happened. Had the screenplay not been based on solid fact and drawn inspiration from some of the tamest of the crimes that happened, this film would not be quite as powerful. Many of the decisions that these characters make are difficult to understand, so much so that they will leave most, if not all, of the theater feeling incredibly uncomfortable. Those who make it through the film without walking out, as many have, will find that this is presented as something akin to a documentary on just how easily manipulated humanity can be.

Dreama Walker’s performance as the true victim of this crime, strip-searched and even sexually abused, is impressive. Her work on the television shows The Good Wife and Don’t Trust the Bitch in Apt 23 has been good and generally lighthearted, and it is her shift into dark depths here that surprises and impresses. The handling of this risky material, with some unbelievably restrained camerawork, is what keeps this professional rather than exploitative. Many filmmakers would choose to focus on Walker’s nudity, treating her as a sexual object rather than the victim she is, but Zobel never judges or takes advantage of his actress.

While Walker brings her best to the table, Ann Dowd’s work stands out the most as a character that could have been treated as nothing more than a villain, but is instead shown as a vulnerable human being who just happened to make the wrong decisions. The immense stress that surrounds Dowd’s character leaves her susceptible to the demands of the caller and the knowledge that a person could do this is what eats at the viewer. Compliance isn’t without its flaws, as any interpretation of a true story often has its stumbles. One of its greatest flaws was overusing the prank caller and giving him a bit of a twisted personality. There were certain scenes with the prank caller that felt unnecessary, no matter how disturbingly well Pat Healy portrayed him.

Compliance may be hard to watch, but it will leave those who watch it to reflect on just how dark humanity can really get when pushed far enough.