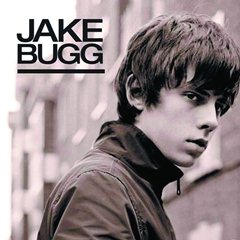 It’s always surprising to me when I come across younger talent. From my experience, most of these youngsters making their way on the scene seem to be completely caught up in the glittery newness of the music industry, will do anything to maintain that world of sunshine and sprinkles as long as possible. And who could blame them, really? However, there are a few that crawl through the onslaught of Disney princesses and Ken dolls to be something full of substance and grit.

Jake Bugg’s debut pretty much erases my preconceptions of every artist still clinging to baby fat. At 18, his self-titled album is a brilliant revelation. It’s simple, mostly a voice, a drum, and a guitar. It’s not glossy or full of cloying sweetness. The songs are genuinely ripped from the kid’s personal experiences — none of which include love in a club or trying to impress a girl with all his bling… this Nottingham youngster has none of that. He’s got his guitar and the company of his friends.

The album opens strong, a brazen and bold statement that perfectly describes his slow ascension toward hometown hero (Lightning Bolt). Then the album continues to explore that classic Brit pop sound, all thrushing drums and strong acoustic wailing. Listening to this debut, I suddenly felt myself swept away to 60s Britain, sitting down at a table in a dimly lit pub.

The tracks range from folk-blues (Simple As This, Country Song) to more Brit indie rock (Two Fingers, Taste It); however, every track is surprisingly reflective. Some of the songs crack and ache as much as some of the most emotional music from the 1960s. Indeed, he’s equal parts Bob Dylan and Simon & Garfunkel. He’s open and honest, unafraid to delve into moments of self-doubt (Broken, Note to Self) or love-tinged melancholy (Someone Told Me, Someplace).

There’s an astonishing maturity to Bugg’s voice that’s almost jarring in its similarities to artists from a different generation. I found myself reminiscing on its simplicity, its timbre and pronounced lilt. It’s lovely and peaceful, yet full of so much honesty, a purity oftentimes lost with the newest onslaught of artists who prefer the quickest way to fame than the care it takes to craft something with the potential to be a masterpiece.

However, despite his voice and his ability to dip into the musical canon of the past, the most brilliant aspect of this young artist is his storytelling. Bugg seems to have taken entries from his diary and painted a subtle bit of poetry atop them. From start to finish, each track is a snapshot, an intricate photograph with enough ambiguity on the surface to know that back beyond the soft focus there’s a story there, a look into someone’s life beyond the lens.

With a debut as fresh as this, Jake Bugg is most certainly headed for big things. The teenager understands the merits of writing what he knows, not reaching for more than is within him to find his inspiration. He’s a lovely discovery in the torrent of über polished licorice that comes from most of the newest breed of teen idol. “Idol“, something one should look up to (in extreme cases, worship) in hopes its grandeur will rub off on you. If there ever was a teen idol that should be adored, the ilk of Jake Bugg would be it for me.