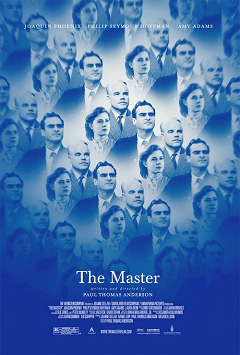 Paul Thomas Anderson’s entire career has been leading up to this moment, and what a moment it is. This is something dozens of filmmakers strive to achieve, and it comes in the form of an ambitious magnum opus, The Master.

An able-bodied seaman named Freddie Quell (Phoenix) is the film’s unstable main character. He drifts along, losing job after job due to fits of drunken rage, until he stumbles upon a docked boat where he finds The Cause. Led by the charismatic Lancaster Dodd (Hoffman), The Cause is a congregation that believes every moment of their past and current lives has been recorded within them. Dodd warmly accepts Quell and The Cause into his life, but it doesn’t take long for them both to begin questioning their surroundings.

The Master showcases many of the characteristics that have defined Anderson’s career so far. There’s the abundant sex of Boogie Nights, the unnerving tension of There Will Be Blood, and the fascinating character studies of Magnolia. The costume and production design reflect a prodigious attention to detail, and greatly enhance the 50s feel. Alongside Jonny Greenwood’s impressive score, songs by Ella Fitzgerald and Jo Stafford complement the film’s beauty. The camerawork is stunning as per usual with Anderson: full of long takes, tracking shots, close-ups, and breathtaking scenery.

Outside of its technical prowess, The Master shines in its exploration of its two leading men. Paul Thomas Anderson’s writing chooses to ignore conventional storytelling, commenting more on human nature and the dangers of excessive power and radical belief. There is a strong focus on the relationship between Quell and Dodd that can be interpreted in dozens of ways, be it master and slave, father and son, brothers in arms, or even the subtlest unrequited romance.

Joaquin Phoenix and Philip Seymour Hoffman are crucial to the film and work as its driving force, leaving even Amy Adams’ great performance behind in the dust. Phoenix dives right into character in an unrestrained, animalistic performance. There is no hint of hesitation, and the switch from fury to childish delight often catches the viewer off guard.

Hoffman is downright magical as the titular Master, a man with a cool demeanor who knows how to speak and understands how to be a leader. While his controlled performance alone is a marvel, it is the scenes in which the great man’s facade fades away that we see Hoffman’s true talent. Both actors’ outbursts never cease to unsettle the viewer, as one never really knows when this seemingly safe, but ultimately very strange, place could turn violent.

Some who enter The Master without leaving their expectations at the door might find themselves disappointed by how different it is from what they’d expected. Those who can put preconceived notions of storytelling behind and submit themselves to Anderson’s methods will find it a masterpiece.