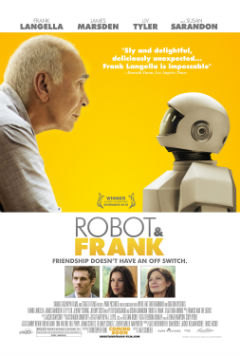 Academy Award nominee Frank Langella gives another Oscar-calibre performance as Frank, a retired thief-turned-frequent-library-patron. His workaholic son Hunter (James Marsden) decides Frank shouldn’t be living alone and buys him a caretaker robot (voiced by a soothing Peter Sarsgaard). Soon the robot has Frank eating steamed broccoli, gardening and going on leisurely strolls through the woods, much to Frank’s curmudgeonly chagrin.

Liv Tyler plays Frank’s activist daughter Madison, who first appears in the film via videocalls (the film is set in the near-future), and later whose visit forces Frank to come to terms with how he truly feels about the robot and its friendship.

Rounding out the cast is Susan Sarandon, whose lively turn as librarian Jennifer proves that you really can be sexy well into your sixties. Her chemistry with Langella is right on the money and it is a pure joy to watch these two masters of the craft work together.

Trouble comes when Jennifer’s library is bought buy a corporation who wants to turn it into a virtual learning space. Jeremy Strong plays Jake, the smarmy CEO, who at one point patronizingly asks Frank if he remembers when books were the only way people got information. The little jabs at the internet age are slight, but boy are they pointed.

Frank decides that with the help of the robot he is going to steal a valuable book from the library in order to give it back to Jennifer, whom he thinks deserves to keep it. This leads to Frank reminiscing about old times and before you know it he’s decided to get back in the game. The question is, is he too old to pull off a heist successfully even with the robot’s help?

Chaos, obviously, ensues and some bittersweet truths about family, aging, the rise of digital technology and the importance of our past all rise to the surface.  There’s a lot said in this film, but it’s told in such a straightforward and light manner that it is never preachy. Hopefully, it’s not too light for critics to take seriously and audiences to warm up to; it surely deserves better.

With a superb cast and a deft touch, Jake Schreier and Christopher D. Ford have a real winner of a debut film with Robot & Frank, with lots of promise for their future collaborations together.