Jeff, Who Lives At Home 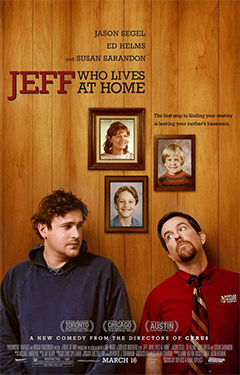 There are plenty of times in life when we ask ourselves whether or not coincidences are really just that, but more often than not we end up believing that it’s all just a twist of fate. In Jeff, Who Lives at Home, Mark and Jay Duplass offer audiences everywhere a chance to explore those coincidental moments in life to find out just how life-changing that missed call might be.

Jeff is a thirty-year-old man who, as the title says, still lives at home. He’s the type anyone would call a loser — smoking pot in his mother’s basement and constantly watching M Night Shyamalan’s Signs, waiting for the universe to give him his own sign. A series of coincidences incited by a television commercial and a request from his mother lead him on a bogus journey through the city that seems to be much more than chance.

Jay and Mark Duplass’ latest film, Jeff, Who Lives at Home, owes a great deal to its mumblecore origins. With a budget far higher than any of their other works, it still maintains the writing and direction style that they are known for, only with a far crisper and visually appealing presentation. It’s a very natural film, with each performance and bit of dialogue feeling just as realistic as the last. Even Michael Andrews’ repetitive and discreet score — which can only be described as a whimsical version of Philip Glass’ music — doesn’t hinder the film’s realistic tone.

It’s hard to imagine anyone who could fit the role of Jeff better than Jason Segel. His work in this film echoes the low points of his characters in Forgetting Sarah Marshall and The Five-Year Engagement, and it suits the sad man we see here perfectly. “You don’t want to be like me,” he tells his brother, in one of the most honest scenes of the film, which affirms that this seemingly dim-witted man suffers through the same insecurities as everyone else. While the film may only mention one particular character in its title, Jeff turns out to be character study of more than just one aimless and unhappy person.

Ed Helms doesn’t do much to break out of his usual role, but there is something more raw and angry in his performance than anything he’s ever done on The Office. With a marriage on the rocks, the sheer desperation fueling his character is something to watch. Susan Sarandon delivers her best role in years as Sharon, the tired mother of Jeff and Pat. “How many good years do I have left?” she asks herself, wishing that someone could enter her life and change it for the better.

We are introduced to each character at an important moment of self-discovery in their lives. Mark and Jay’s writing presents their growth from beginning to end as nothing but natural, even as their fates collide in a life-changing climax. Each decision that these people make lies perfectly in accordance with the characters and the personality that we’re introduced to. One particularly surprising aspect that the directors explored was the fluidity of sexuality. They let audiences know that sometimes the most important thing is finding someone who sees you exactly as you are, and that nothing is quite as simple as it seems.

Jeff, Who Lives at Home is a movie that presents the question, “How do I know what to do?” and answers it by reminding us to always go with our gut and trust our instincts. It says maybe, just maybe, everything really does happen for a reason.