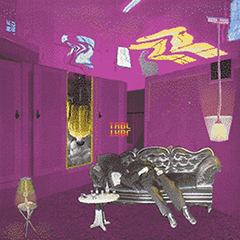 A year ago when whispers of an artist named Dean (stylized as DΞΔN) started circulating, I paid little attention. I wasn’t interested in yet another R&B crooner who wore the genre as a shabbily crafted costume to show how “down” he was. Then I saw the kid up close and personal at this year’s SXSW, and my preconceived notions of his musical abilities were ground to dust. A couple weeks later he released his debut EP and the final puff of air to the particles of my skepticism.

130 Mood: TRBL is such an incredibly smart piece of music. A very simple concept, telling a story backwards, leaves room for both his musicality and his exceptional vocal. Opening with an Outro, the subtitle And You expressing the tail-end of a thought—the story of “Me and You”—the relationship ending with police storming the door as our protagonist wallows in the dregs of fast love gone wrong. It’s aggressive, angry, but even more than that it’s a resignation, consigning one’s self to abject isolation. He’s very much grounded and left to deal with the memory of what was and how it all went horribly wrong.

We’re dropped on the scene of what was probably the previous night’s excesses. Taking cues from Kendrick Lamar’s Swimming Pools—the warbling cadence of “Drink, smoke, pour up”—Dean drips into the story of his decadent self-pity. Pour Up—a slurred distortion of the Korean word for “loose”—very precisely illustrates a scene of self-destruction as a man drowns in his own sorrows.

As the album continues, we’re given front-row seats to the dawn and eve of a very hastily constructed relationship. The affection of this couple is as self-destructive, if not more so, than Dean left trying to pick up the pieces of his broken self. Bonnie & Clyde leaves little to the imagination as to what ultimately led to the dissolution of this short-lived romance. The title itself is proof positive these two were engaged in little more than a dangerous game of cat and mouse that was searing in its intensity but inevitably ended in scarring heartache. Dean is left to mumble “Who cares” as she walks away.

His initial reaction to his lover’s displeasure is to ask What 2 Do, reaching out to his friends, collaborators Crush and Jeff Bernat, for advice. But his reflection on the suddenness of their affair—first finding the brightness of new love (21), then charging forward recklessly and full-bodied (I Love It) only to realize he’s acted too impulsively and left himself vulnerable (D (Half Moon))—is the perfect example of reckless youth. 130 Mood: TRBL is a fable about the pitfalls of entering into a relationship darkly, a cautionary tale about how those things that burn brightest have a tendency to leave the deepest scars.

Throughout this entire journey the listener is gifted the brilliance that is Dean’s voice. It’s not wholly unique, to be sure. One can hear his influences on his breath, feel the presence of artists like Miguel and his mentor Anderson .Paak with every note that comes out of his mouth. He wraps all his experience working with producers and artists from the States for two years into a cohesive oneness, creates in himself the prototype for a perfect R&B/Soul artist—all hard angles and soft whispers, milky coos in the ear and watercolor hazes of musical dexterity.

There’s something truly elegant about the album’s execution. What Dean manages to do with 130 Mood: TRBL is tell a very simple story and stitch into it a complex series of sounds. He very meticulously makes those sounds work in concert with the purity of his vocal. This was an album that completely threw me for a loop. Despite R&B’s constant presence in the South Korean music scene, there were really only two artists willing to push the self-imposed restraints of R&B. Dean came into the picture and completed the trifecta, exploring the edges of R&B and moving fearlessly beyond them.

You can purchase 130 Mood: TRBL on iTunes or at YesAsia, KTOWN4U, Synnara, Yes24, and Interpark.