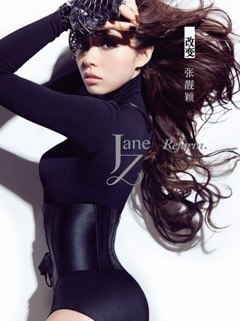 As an artist, Jane Zhang is possibly the only Super Girl contestant that’s received any international notice — Hello, Oprah~ . It is due to her “international” style that she would make the transition from home market to the international stage with ease. She can hit the high notes and looks the part. However, there’s something amiss.

Reform is Zhang’s fifth studio album, her second under current label Universal, with work with a broad array of producers of American, Chinese and Korean background — the album is… well, clean cut and polished.

The album opens with the kind of rocking My Looks, and continues with the still rock-influenced Chasing Love. It’s very easy, palatable pop rock and will be easily liked by random people that could run into it online. The album takes a slight detour with Playful with a bit of Sexy, a track that sounds interesting with its arrangements, giving it a more blues-y vibe with less pop flare, but enjoyable nonetheless.

The ballads on the album, which are usual staples on Zhang’s albums, are good vocally and deliver the sentiment of each song, coated with a layer of regret and hurt that give the songs a little extra. The rest of the album is filled with pop, sometimes too heavily produced, but with some good hooks here and there. The album closing with the slightly uplifting and happy Reform is a nice touch.

Overall, Reform is one of those albums that (non-English speaking) people will listen to and feel nothing is “weird.” It would be an interesting sell in the American market, having that issue of not being sung in English and all, but the sound is for international audiences and heavy radio rotation for sure.

Most interesting track: Playful with a bit of Sexy.