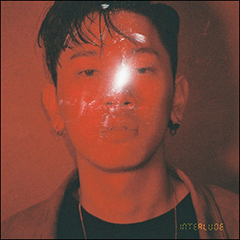 The mark of a truly great artist is his or her desire to discover new ways to push his or her musical limits. When it comes to artists who strive for mainstream notoriety, however, you won’t always find that passion for creativity. Thankfully there are a few artists who do manage to go beyond their musical boundaries and create some stellar lyrical content and stunning composition. Crush, one of South Korea’s R&B mavens, has helped pave the way for musical experimentation in the country. His work as a producer has obviously fueled his lust for experimentation.

In all honesty, it was beginning to look like Crush was going to be just another R&B crooner, nothing but love songs and a few weepy-eyed lover’s laments. However, with Interlude, I found myself impressed with his expansive musical vocabulary. Though his singing style still errs on the drippy side, there’s poise to his execution. He understands his limits and exploits them in the best way he possibly can.

Opening track In the Air is a prime example. He makes use of the ever-popular melodic rap—a technique in which the vocalist rides the cusp of singing and speaking. But surrounding the half-sing, there’s an absolutely flawless three-part harmony. He follows it up with an unfettered bit of vocal power. The track itself is a compositional masterpiece. While simplistic, the music caresses the vocal, literally taking to the air as it reaches its zenith.

The next two songs were released as partner singles, showing two very different shades of Crush’s character. Woo Ah Eh is the typical sweat drip of R&B he’s given us with tracks like Hug Me and Give it to Me. Though vocally sweet, there’s so much depth in the composition. There are three movements in the three minute forty-two second song, each change in signature another layer of the man’s love story and his expression of his desire for the woman lying next to him. Meanwhile, 9 to 5 is pure ego, a bit of self-aggrandizing to allow listeners a peek inside the self-proclaimed hustler.

As the EP continues, one gets caught up in the textures of the piece. There’s a definitive physical touch and taste to Interlude. While many may see it as nothing more than a giant ego stroke, what else is music, really, but a means to sonically define the physical world? What Crush has done with this five-track piece of music is give taste, scent, and palpable feel to a genre that can and does tend to stagnate. Never mind the genre, Interlude went a long way in revitalizing Crush’s discography. When one dedicates at least one track on his album to another artist’s physical voice (as in Castaway) so he can just step back and paint, you know his focus isn’t on appeasing a multitude. While the K-pop fandom was focused on summer-y comebacks from their idol favorites, Crush took a moment (as the album title suggests) to simply create music.

He manages to inject his R&B with honest-to-goodness soul, exceeding beyond just what the genre may be and giving it an old-school depth that’s always surprising to the ear. Track In the Air is an aural delight, the harmonies tight and full of so much musicality it brightens the soul and brings lightness to the ear. While a track like Dust is playful in composition—dips and swerves, peaks and valleys.

Interlude is most definitely self-indulgent. You can tell this album was more for Crush than it was for anyone else. I liken Interlude to first and second drafts of a never-ending journey to self-completion. He constructs and deconstructs his sound, creates and destroys his style. His voice is crisp and elegant, and his vision is as broad as I think I’ve seen from an artist in the genre in South Korea. Interlude is proof positive of his love of music and what he wants and intends to do with it.

Please purchase Interlude on iTunes, at YesAsia, and KTOWN4U.