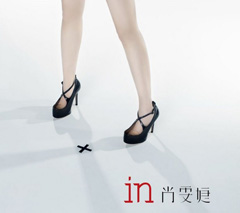 * This review has been edited since the release of To McQueen replacing filler track Love Warrior.

Let’s get this out of the way first — Laure Shang’s sound on this album is nothing short of amazing. She actually swifts through genres with ease as she continues exploring pop with electronic sounds, as well as going through a softer version of hard rock, ethnic tones, new age and blues.

The album starts with a literal departure as Shang is — leaving a place or arriving to one — at an international airport, and Underneath begins playing with a light simple delicate piano that deepens, as Shang says “I know what you’re thinking, and you’re wrong. I’m not gonna sing you a song. This time I’m gonna let you see what’s inside of me.” As she continues talking in English and French interluded with vocals in the chorus — it’s a great bizarre opener for the album, but one that promises something.

It continues with Imagination, a really theatrical mid tempo vocal piece layered over a steady beat sometimes accompanied by a violin that explodes into an almost opera-like ending. It practically clashes a little bit with the autotuned intro to Where Is my Soul?, which sounds a lot like a dramatic dark rock song — as if Shang could make a duet with Evanescence’s lead Amy Lee.

Actually, from the tracks that we had already heard of the album prior to its release, I’m surprised that all the non-heard tracks have been of such quality. Pick any of them — maybe except Underneath which works best as just the album opener — and you could give it a nice radio rotation period.

However, the most hyped track in the album titled To McQueen, which is a direct message to late designer Alexander McQueen, doesn’t quite live up to the expectations. It’s not as if the song is bad, but it does stick out from all the tracks in terms of themes, showing a fangirly side to Shang as she talks about almost worshiping McQueen’s work — it’s a very familiar theme to all of us who’ve been fans of someone, but seems like a bizarre inclusion to the tracklist.

After the slight disconnect, IN continues with The Way ! Am, which throws away all the electronic — and it’s the only Mandarin language track in the whole album — giving us the most blues-influenced track Shang has probably ever recorded for an album. It’s contagious and quite addictive once you reach its hook: 你喜欢不喜欢跟我全都无关 [ni xihuan, bu xihuan, gen wo quandou wuguan / “Whether you like it or not, it has nothing to do with me“]. I can already imagine a music video of Shang performing this in a lounge bar in the 30s or 40s.

Of course, it all closes with the new age and tribal La Muse de la Nuit. This gives quite a zen ending to the whole musical adventure that Shang has taken us through, which without the release of Nightmare earlier would have made the effort of IN a lot more hard-hitting.

Having said all that, I’ll leave you all with something Norwegian singer Marit Larsen said about making albums when she was promoting her second album:

To me, one of the biggest challenges and thrills of being a recording artist is not just writing songs, but making albums. A good album is to me one where you can listen from beginning to end, experience highs and lows – and at last feel equally satisfied and hungry for more. An album really should not resemble a random playlist or a “best of what I wrote the past couple of years”. My favorite albums of all time have these qualities (and they are something I will be trying to match for the rest of my life). –

Best tracks (outside any of the Cantonese versions): The Way ! Am