Sodagreen – What is Troubling You 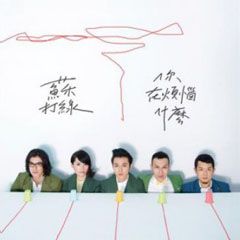 Taiwanese pop folk-rock band Sodagreen — known as 蘇打綠, Soda Lv… literally “Soda Green” — meets expectations with their eighth studio album entitled What is Troubling You, but kind of disappoints at the same time, considering the release of their music video for What is Troubling You last week.

Though the band seems to be extra mopy, missing more playful tracks like Claps (掌聲落下) [Xiami] or Imperial Garden (御花園) [Xiami] from Summer/Fever, or Daylight (日光) [Xiami] and many others from their album Daylight of Spring (春·日光), I guess that comes from the theme of the album. You can’t have a happy album when you’re asking someone what their troubles are. It makes sense that the tone of the album would have to be more solemn.

What is Troubling You begins with the instrumental piece of This Moment is Forever, which serves as the perfect introduction to The Limit of Happiness, with Wu Tsing-Fong’s distinct voice asking us to wonder what our opinion of true happiness really is.

In a surprising turn of events, Ella Chen from S.H.E turns up for a duet with Wu in for I Wrote of You in my Songs, creating an odd combination of harmonies, though it is the most normal pop song in the album in terms sound and lyrics. In If Love is Like Condensation, however, the band gives us the lyrics with the most similes, trying to combine different facts of love with different stages of condensation, like evaporation and fragmentation. The song concludes with a big crescendo that then, almost as if the process is done, ends in a softer note.

The album then seems to get back on track with Enjoy Loneliness, or at least it seems to lyrically and musically. It fits What is Troubling You relavtively better than Bird’s Nest — which seems to be at another tempo — with its almost inspiring strings. It then turns gloomy once more with Cocoon, but by then the album is already showing hints of wanting to turn all these slightly depressing songs around with big crescendos halfway through their tracks.

The Romantic Clique is certainly a noticeable track. It’s louder than all of the previous songs and marks a separation with Control Freak that reminds me of Coldplay during their A Rush of Blood to the Head days, which I’m attributing to the abundance of those “whoa oh ohs.”

The album’s definite best track is What is Troubling You, which accompanied by claps and backing vocals, seems to be the right amount of inspiration and is the most Sodagreen-like of the whole album. The lyrics are almost a bit too Christian rock at times, but they work, making the song the staple of the album. And with the video the song works even better.

Something interesting to note is that the album seems to play nicely on loop because This Moment is Forever makes for a perfect connection between What is Troubling You and The Limit of Happiness.

Highlights: What is Troubling You, Enjoy Loneliness, The Limit of Happiness

Preview on Xiami.com | Like it? Buy the album on YesAsia in the Hong Kong version and the Taiwan version