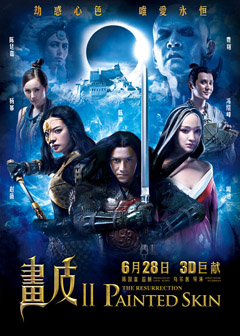 Following in the footsteps of Painted Skin, but not really, The Butcher, the Chef and the Swordsman director, Wuershan, expands on Gordon Chan’s work, vastly improving the movie technically and, with a team of more efficient scriptwriters, in story structure.

Unlike regular continuing franchises, Painted Skin 2 has nothing to do with its predecessor despite having its three main leads back in completely different roles — except for Zhou Xun who is indeed back as fox spirit Xiaowei. After being punished with 500 years of ice imprisonment, Xiaowei escapes and lives, devouring hearts of men in the hope that one day someone will willingly give her their heart so she may become human.

It is in one such occasion, in search of her next heart meal, that Xiaowei is “saved” by a masked and hooded warrior whose spirit (or heart) is so warm that it manages to melt the ice prison that threatens to engulf Xiaowei once again. To her surprise, the masked warrior turns out to be Princess Jin (Zhao), who is on her way to White City where the source of her passion, guard Huo Xin (Chen), resides.

But Xiaowei must get a human heart, given willingly, before the coming eclipse is over, and Princess Jin’s seems to be the perfect candidate.

Just like in the first movie, the highlighted stars in Painted Skin 2 are Zhao Wei and Zhou Xun, playing quite incredibly against each other in an interesting symbiotic relationship that might raise more than one eyebrow. In this case, Zhao goes back to the suited armor of her Mulan days — which in itself would have been an awe-inspiring affair if it had had a competent script and director — and gets to play a much more interesting character than her previous loving wife. While Zhou manages to show a non-human wanting to be human with such conviction that it is hard not to fall for her a-heart-for-your-skin deal. Their chemistry works despite some body switcheroo and acting inconsistencies.

There are obvious problems scattered throughout its story, like how selective Princess Jin’s memory seems to be regarding Huo Xin, who explicitly tells her that he can’t love her because he knows he’s just a guard and she’s a princess. Yet, when Xiaowei asks Jin about it, she responds it’s because of what’s under her mask. Of course, it can be part of Jin’s character, but it’s a highly undeveloped trait that makes her not-so-worthy of Huo Xin’s ultimate (but kinda silly) sacrifice.

Painted Skin 2 also suffers from classic movie bad guys — these people look evil, and though a reappearance of Buffy the Vampire Slayer styled werewolves are welcome in the movie’s most grim and horror-styled scene, the bad guys of Tianlang come and go like the scriptwriters needed them to give the movie the action-packed, epic battles often seen in this type of movie. Though I really liked that ceremony twist, the resolution of the film feels rather like a cop out.

In the end, however, Painted Skin 2 ends up being adequate entertainment. Even more visually stunning — except for that bear, which looks like the cheapest CGI — than its predecessor with stronger characterization and even more sizzling female leads. The only thing required for an enjoyable experience, some suspension of disbelief.