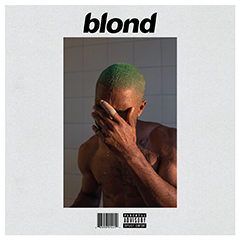 There are moments when critique is too difficult to write. Moments when one is struck speechless simply because they have so much to say. Here I am, meant to review an album, and I’m suddenly without the words because there are too many of them. I’ll go ahead and tell you that Frank Ocean’s Blond receives five stars from me. With that out of the way I can get to the business of sorting out the Gordian knot of thoughts and emotions I had about my experience listening to the work of art that was Ocean’s sophomore effort.

It’s hard to imagine this only being Frank Ocean’s second full-length release. But art is much like childbirth. It happens in a moment of intense passion, then takes time to grow until a child is born. And just like bearing children, an artist passes along his DNA and hopes what becomes of this cellular amalgamation is something genuinely spectacular. Blond is, in a word, spectacular.

Frank Ocean is an… enigma seems too shallow a word, genius too simple. For while his artist’s mind and ambition are shrouded in mystery, though his talent momentous, his vision seems too infinite for this time and space.

Blond is the culmination of not just sounds and ideas but dream sequences, illusions of grandeur, hard punches to the gut, and the trial and error of living each day. It is an alarmingly smart piece of music, sophisticated in structure yet raw and almost profane in execution. It takes someone heavily invested in music to concoct an album as deceptively simple as this.

Ocean manages to make music that is almost laughably simple. There are almost no grand-scale compositions. Instead, Ocean opts to explore the expansiveness of silence, to measure the light years between one note and the next. He provides a skeletal foundation for each song and molds the meat of his adroit lyricism to each melody like the red clay of the first man. He breathes life into his creation with the dexterity of his vocals. What he accomplishes with Blond is to show how an artist can be both the conduit of something beyond himself and that very higher being. Portrait of the artist as lord of his craft.

But let’s bring the album back down to earth. Blond reveals Ocean at his most human. Reminiscing about the dawn and inevitable sunset of love (Pink + White), then being left to beg for its forgiveness and rebuild (Ivy). The pressure of being everything to everybody, only to be left alone in self-doubt, “whole body see-through” (Nights). The haze and turmoil of a life lived through a series of expectations and the pain of being incapable of meeting them; the excesses of status and how it crushes the senses, warping the human into something unrecognizable (Nikes). We go from loving and being loved, to being ridiculed (White Ferrari). The deep and ancient struggle for acceptance of self, for acceptance of skin, imperfection, shortcomings, the desire to reach for someone or something more (Pretty Sweet). It’s an album that is so painfully human, it opens itself and its creator up to judgment, stones cast from those who believe themselves without sin.

Blond above all things is an album of reluctant self-discovery and almost spiteful self-reflection.  In the same breath he declares the audacity of his blackness and its apparent inevitability (“pour up for ASAP, RIP Pepsi, RIP Trayvon, that nigga look just like me”), professing a molecular-level connection with deep brown, he reluctantly but unapologetically admits, “At the moment I prefer yellow, red-boned, so mellow” (Solo). He more openly explores sexual fluidity, reliving the brightness and inherent fear of finding attraction in someone of the same sex (Skyline To, Self Control, Good Guy). He’s honest and frail, audacious and afraid, and while left open to interpretation, it is all a part of who he is.

Every story, of course, begins with the cover. Consider the boldness of the narrative, then the act of hiding his face, shielding his eyes while he stands bare and on display proclaiming, “Boys don’t cry.” There’s pain, mystery, something delicate and bold all wrapped up in the gesture of hiding the eyes—he gives what he chooses, leaving the windows to his soul sealed shut.

Those who contributed to the vocal and lyrical color of this album were integral to the vastness of Blond’s scope. André 3000 pierced through the bravado of isolation to reveal the insecurity of existing, the self-doubt in living for one’s passion. Kim Burrell gave voice to the abstract idea of love and its many heartaches by vocalizing her dedication to the one she loves (Godspeed).

His influences aren’t subtle, but they aren’t meant to be. Ocean is educating us. He nurtured this sound, fed it on the influence of Brian Wilson and Roger Troutman. Sprinkled purple raindrops from Prince and explored the prismatic kaleidoscope of Robert Glasper. Ad-libs from Elliott Smith to express the imposed duality of living how one wants versus how one is told he’s supposed to, and after declaring his lack of bravery, waving a fond farewell to one role while begrudgingly stepping into another, saying, “This is not my life.” (Seigfried) A song composition compliments of the Carpenters to paint the excitement, then fear of loss inherent in mutual attraction (Close to You).

In the end there’s just too much to unpack to write something as crude as a review. Lyrically, it’s as raw as anything released this year. Musically it’s an amusement park, thrilling and frightening, exciting and nauseating with its competing sounds, smells, and tastes. Vocally it’s a banquet of sounds and textures.

Frank Ocean has left a rip in my heart. There were moments when I was genuinely so close to tears my throat was raw for long moments afterward. As he was moved to quote Elliott Smith, allow me to wax Jeff Buckley: he’s the tear that hangs inside my soul forever. He manages to take what’s inside the listener and expose it right next to his sin and imperfection, proclaiming we are the same broken thing. Blond is the epitome of the human experience, an album that from cover to last note explores the paradox of being human.

You can purchase Blond on iTunes and Boys Don’t Cry.