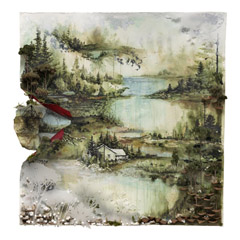 Some of you might remember Bon Iver from 2008, when he became a revelation thanks to his moody, meditative debut, For Emma, Forever Ago — or “the album that was recorded entirely in the woods.” Three years and an EP later, he is back with a more ambitious project: a follow-up to his critically acclaimed first release called Bon Iver, Bon Iver.

The simplistic approach taken on his previous album is gone – while Vernon recorded his first album entirely on his own, and with very little personnel throughout the process, his second album’s long credits list shows that he opened up to incorporate elements previously unseen in his work. For Bon Iver, Bon Iver, Vernon has brought in a saxophonist, a pedal steel guitarist, three engineers to help with the mixing, and a few other multi-instrumentalists that added an impressive list of sounds to the record. In this album, you’ll find a soothing convergence of various brass and string instruments, vibraphones, synthesizers, flutes and percussion elements, a mix that might seem too difficult to put together and surprisingly create such rustic, yet sophisticated folk.

Every song on Bon Iver is a world of its own, each with its particular ambiance, a mood that is ever-so-changing and unique for each single track. You will find delicate pianos, echoing voices and upbeat crescendos, all in one single song. Together, they form a progression that seems to peak emotionally with Calgary, the first single off this album.

With rich, well-arranged and dynamic melodies, Vernon’s falsetto-ish vocals are almost angelic, singing about intoxication, longing and escaping. Together, Bon Iver, Bon Iver is a risky enterprise that not many could have pulled off. It is endearing and melancholic, evoking the truest emotions from the listeners. It retains the sincerity of Emma, but exploring a broader spectrum of emotions through soundscapes, leaving the utter loneliness, despair and sense of loss in the backburner, but not completely out. As a man who has had his heart broken, Vernon plays the part with utmost subtlety, inviting the listeners to peer into the intricacies of his pain, stripping himself of all layers, and letting everyone know he is moving on.

Some say that Bon Iver’s For Emma, Forever Ago feels like winter, dark and mournful. Bon Iver, Bon Iver feels like the beginning of spring, still deep and mellow, but hopeful and slightly bright.