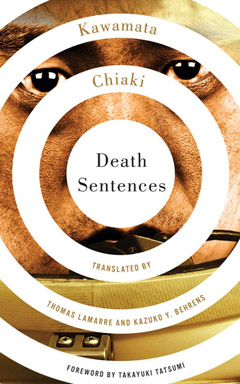 He wished to approach Duchamp at such a conceptual level of theory.

And that’s why…that’s why…But no, this was different.

(This thing was different!)

André Breton wrote in 1924’s Surrealist Manifesto, “It is not the fear of madness which will oblige us to leave the flag of imagination furled.” Yet in Kawamata Chiaki’s novel Death Sentences, Breton himself fears the madness unleashed via the imagination of young Vietnamese-French poet Who May (Hu Mei). The killer poem first strikes in 1948 Paris, then slithers along towards epidemic status in 1984 Japan.

Kawamata fashions his cerebral thrill ride with quick sentences, dashes and thoughts. Each chapter propels the high-concept mystery through time and space, as the poem lies in wait to kill again. As Thomas Lamarre afterword “Vortex Time” explains, Death Sentences uses the infection horror backbone to display art in times of extreme military and commercial powers, whether it be the Surrealist exile from Nazi-occupied France, a major department store commercializing art movements during Japan‘s economic “Bubble” era, or secret police formed to exterminate the poetic threat. The well-intentioned situations find themselves acquiescing in some ways to forces they disavowed before, in pursuit of a greater goal. Yet even art becomes a devastating weapon, and the secret police trying to save the world find their searches degrading into abuse.

One wonders how Kawamata would have worked the Internet into the story if he had written the novel later than 1984. He was inspired both by George Orwell’s 1984 and Philip K. Dick’s Martian Time-Slip, and commentators note how the person-to-person infection method parallels the videotape villain of Koji Suzuki’s 1991 novel Ringu (リング), which spawned the horror movie franchise of the same name. People consume the accursed media object, and make copies to distribute it to others. Spreading the poem in Death Sentences, though, does not have the same outcome as copying the videotape in The Ring.

The effect of Who May’s poem is more of a shuffling and stumbling towards demise. It imparts a lax, soporific or wandering effect on its victims; distorting appearance and behavior while the mind drifts back and forth through irrationality and possibly another dimension. Narcotic connotations are often added to the medical terms. Afflicted readers get high from rereading the poem. By the time the first lines of “The Gold of Time” actually appear in the book, underlying fear generated by plot and descriptions may lead readers to briefly scan or glaze over those lines, echoing the curiosity and dread of characters soon to be infected. Even issues of translation are addressed, as the poem moves from French handwriting to Japanese print and even into song.

This 2012 translation, by Thomas Larre and Kazuko Y. Behrens, of Death Sentences reads remarkably well, bringing this dizzying story to English-language readers. It may help to know a little about Surrealism beforehand, but the momentum of the novel should help most readers appreciate Kawamata Chiaki’s imagination.