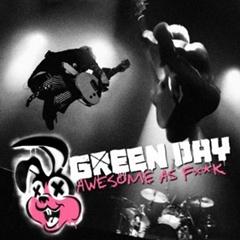 To me, a band is only as good as it is live. If you can’t sing live, on stage, in front of your audience and sing well, then you shouldn’t be on stage at all. Green Day is one of those bands that not only perform well, they give off so much energy while on stage that you can’t help but get pumped up right along with them. For their fifth live album Awesome As Fuck, Green Day rocked the stages of more than half a dozen countries and brought it to CD for fans to enjoy.

Awesome As Fuck is a great album for fans who can’t afford to go see them in concert, or who aren’t close enough to see them where they tour. The band sounds just as great live as they do on their albums. They have plenty of old favorites mixed with the songs of the newest album 21st Century Breakdown, which the band was promoting on this tour. A nice addition to the album is Cigarette’s and Valentine’s, a new track that was previously unreleased. This was due to the theft of the album it was supposed to be on back in the day’s before American Idiot. It might not be the newest song they’ve made together, but for some fans it’s the first time they got to hear it.

My biggest criticism with the album is that it’s not really any different from the studio recordings. I love the live aspect of it, but if they had done a little remixing or added new arrangements to some of the songs it would have been even better. And hearing Billie shout, “Let’s Go CRAAZYYY” in almost every song got pretty repetitive after a few songs. But, in all, it’s a solid album if you’re looking to get pumped up for something and it’s a great compilation of Green Day songs. Not to mention it comes packaged with either a DVD or  Blu-Ray of their concert in Saitama, Japan as a bonus.

Best Track: Good Riddance (because it brought back some good memories while I listened to it.)

Preview on Xiami.com | Buy it on Amazon