Offspring, The – Days Go By 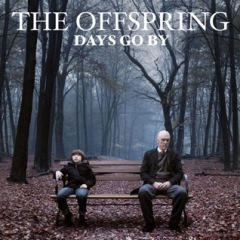 I was going to review The Offspring’s ninth studio album Days Go By last year, but I didn’t because I got lazy. Yet, with The Offspring coming to my country for the first time tomorrow, I might as well talk about their latest album, which is the reason they’re still touring around these days.

Days Go By lives up to its title, considering The Offspring has been around the music scene since 1989. Their earlier days were pretty much straight-up punk music, but since Americana happened, they have been pretty much a mainstream act and haven’t been able to overcome their last big peak.

In terms of sound, Days Go By presents a mature Offspring to a certain extent who reflects in the future of life, relationships and other stuff. Most of the songs tap on their rock roots, but a select few stand out for the right and wrong reasons.

Days Go By stands out because of its reflective lyricism and it bears similarity to Foo Fighters. Then, there is Dirty Magic — remember this song from Ignition? — who gets the remastering treatment because of Ignition‘s 20th anniversary. Despite its heart-stripping overproduction — the chorus suffers from this the most — it’s the darkest song of the album in sound and still manages to stand out better than almost all of the new tracks combined except for closing track Slim Pickens Does the Right Thing and Rides the Bomb to Hell, which sounds great enough to hang around with Offspring’s best singles — it’s being played often in their current tour [1] — and I wished this could have been promoted harder as a single. How can you not feel pumped when you hear a line such as “Dance, fucker, dance, let the motherfucker burn!”?

The weakest song, to no one’s surprise, is comedy song Cruising California (Bumpin’ in My Trunk). Granted that it can be either perceived as either a great parody and a accurate depiction of the current pop scene or the worst song The Offspring has ever made. For me, it’s a mix of both things and it’s unsettling to hear it considering The Offspring was able to do better comedy/parody songs without having to sound like Cruising California [see: Pretty Fly (For A White Guy)]. OC Guns, a funky gangster-esque song, could have easily been part of the official soundtrack for Casa de mi Padre with its spanish swearing. It sounds funnier than Cruising California, but it also sounds kind of cheesy.

The real question, however, is: how much has The Offspring changed since their latest efforts? Not much, really. Most of the tracks aren’t that special, but Days Go By isn’t an awful album by any means: it’s average at best. Some tracks stand out a lot for the right and wrong reasons, though. I’ll admit that it grew on me a little bit on my recent re-listen, though. But if you expect the next Americana or Smash, you’ll be pretty disappointed.

Preview it on Xiami | Like it? Buy it on Amazon or iTunes