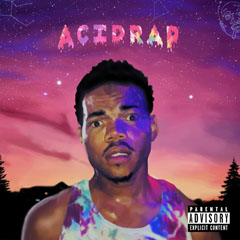 Seems like 2013 is the year of exceptional music from artists straight out of high school. From the acid-soaked mind of Chance The Rapper we have this glorious piece of music. His second full-length mixtape is a full-sensory experience. The music manages to engage your sense of touch and sound while Chance’s lyrical gymnastics pulls the mind to experience everything in warped colors and twisted imagery.

Acid Rap opens up with Good Ass Intro, an explosion of sound that’s not exactly something you hear very often. Imagine a song that’s simply an expression of being alive, if in some sort of in-between space of consciousness. The album continues to obstruct your understanding of what’s reality and what’s some sort of surrealist daydream. Pusha Man opens up with about two and a half minutes of actual music, drops out for about twenty seconds, then lilts into another piece of music that shows a different side of the artist: not only Chance, the rapper but Chance, the human being.

The album is more an audio diary than anything else. Sure, you’ve got the same themes of drug use that you’d expect from any awkward high-school stoner. However, you easily find yourself a part of his journey, if for nothing else, to attempt to follow his train of thought. Though Chance’s style is very deliberate and swift-tongued flow, his words are precise and his images are concrete, albeit slippery. His ability to match pace and syllabic dissonance is astonishing, something like smoke wrapping around stone — you can feel and see it, but if you reach out and try to grab it, it twists around your finger and becomes something different entirely.

If you were to take Acid Rap at face value, you may think of it is nothing more than the musings of an experimental teenager. But delve deeper into the psyche of the piece and you realize Chance is opening himself up more than most would ever dare. Whatever his mind makes of the reality around him, he puts it on paper and lets it slither through the mic. Though he invites an incredible cast of cameos (the likes of Twista, Ab-Soul, and Noname Gypsy), there’s no doubt Chance is the ringmaster in this circus of vernacular and verbal quips about his life.

There’s nothing filtered here, nothing kept out. The music accompanying Chance’s daily confessions seems to be whatever happened to be blasting in his earphones as he wrote down his soul every night before he went to bed (for example, using J Dilla’s Fall In Love for Everybody’s Something and sampling an early Kanye West track for Good Ass Intro). The tone and melody matches each song perfectly, pushing this mixtape into something purely artistic and almost hauntingly cerebral.

Acid Rap is the sort of music you get from someone unafraid to completely expose himself. Indeed, that’s what you expect from a mixtape — complete and absolute fearlessness. But it’s more than that. Chance sets himself apart because he flawlessly accomplishes something that very few actually do, or at least with this much success: uses the conceit of hallucination to expose absolute reality. Chance takes his life and uses metaphor brilliantly and quite liberally throughout. An album like this exists on its own plane of creativity.

You can listen to Acid Rap at Chance The Rapper’s website, and you can download the album at Audiomack and Datpiff.