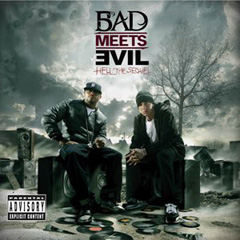 Bad Meets Evil is an American hip-hop duo composed of Royce da 5’9″ and Eminem. Their origins date back to 1998, which had them recording underground songs, including Bad Meets Evil from Eminem’s The Slim Shady LP album and Renegade, which was later used on Jay-Z’s The Blueprint album, with Jay-Z replacing Royce. Bad Meets Evil broke up in 2002 after Royce fell out with Eminem’s D12 group, but now they reunited and released their debut EP Hell: The Sequel.

Two different entities, with a propensity to put these N-U-T-S up inside of your fucking mouth.
Welcome to the CD!

That pretty much sums up what Bad Meets Evil is about.

Welcome 2 Hell serves as a solid introduction for the EP. Fast Lane not only lets you know that Eminem wants to stick his dick on Nicki Minaj’s ass (Royce also wants her too during A Kiss) and mocks David Carradine’s death, but it’s a very good lyrical assault on bitch-made rappers.

I’m on Everything features Mike Epps and checks on drugs and liquor brands — funny how Eminem raps about this since he’s been sober for years — as well as making a reference to The Hangover (I done woke up with a fucking tiger in my bathroom), in which Epps appeared.

Lighters is easily the weakest track of the EP and feels out of place among the rest of the tracks thanks to Bruno Mars being involved in it, despite the song dealing with Eminem’s return to rapping and drug addiction while Royce’s verse deals with his rising fame. I mean, you listen to the song and it feels more like a song Bruno Mars would pull out rather than something you would expect from the two rappers.

There’s plenty of gross humor and taking shots at celebrities — it was a matter of time before Eminem jumped on Justin Bieber (A Kiss), but anyone who hates the Canadian pop star would have wished it was done in the same way Eminem did it against Moby years ago — as well as cultural references on Hell: The Sequel that may seem pointless to some, but the EP is really good for the most part thanks to Royce and Eminem’s ferocious assault, rap battle feel and sick rhymes on almost every track as well as solid lyricism and being autotune-free. Royce can hold his own weight against Eminem and has some solid lines, but Eminem clearly stands out better for the most part — this is the best thing he’s done in years.

If only Royce and Eminem avoided the use of Bruno Mars — I hate him, but I’m sure Lighters will become a hit among casual music fans in the States eventually, it’s radio friendly. Hell: The Sequel would have felt stronger as a whole.

Best track: Could go with either Fast Lane or The Reunion.