Boy and the World, The 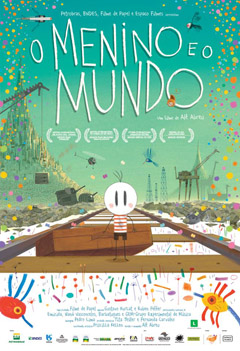 Sometimes I look at commercial American animation with all its render CGI gloss, and it feels like they’ve reached a point of just pushing for better renders, textures or lightning. They all seem to look similarly without being the same, very much like commercial Japanese animation. However, European animation (especially the French industry) is making its tiny mark with as varied styles as Aya de Yopougon, The Rabbi’s Cat, Chico & Rita, Waltz with Bashir, The Secret of Kells or The Congress. Though not broad in commercial appeal, they seem to be targeting a different market than other up-and-coming industries who did ventured in with movies like Peru’s El Delfín: La Historia de un Soñador or Los Ilusionautas, China’s Legend of a Rabbit, or the height of Argentina’s Metegol.

Then came Brazil productions that for the last two years have taken home the prize for Feature Film at the Annecy Animation Film Festival for Rio 2096: A Story of Love and Fury, and this year for Abreu’s The Boy and the World, which alongside Until Sbornia Do Us Part create a visually distinct Brazilian animated Holy Trinity of modern times.

The Boy and the World follows the life of a Boy (Garcia) who lives in a remote village with his parents until one day his Father (Campos) leaves to work in the city. Feeling his absence, the Boy leaves behind his quiet life and Mother (Horta) in search of him, only to discover a world filled with strange people and machinery through his multi-colored and abstract eyes. It’s visually wondrous at times with its playful sequences of colorful patterns to show a rather bleak scene at a cotton plantation, or even the mysterious patterns of a stone that hides the sound memory of the Boy’s Father.

Most of the time, the film seems to want to play around with a white canvas, allowing Boy to explore his minimalist surroundings. However, as his universe expands, so do the details of his layouts- first, with a simple gray gradient that gives us a sense of depth, which develops into full-on constructed cities by the third arc, which reveal that we haven’t been looking for the boy’s father, but have been chasing his memory. It’s actually a lovely story that gets muddled by all the issues of modernization and industrialization, a similar attribute that Sbornia managed with a lot more spark and pizzazz.

Overall, though, The Boy and the World is a wonderfully visual experimental film — though it tells a straight-forward story — that should excited animators by the mere fact that it doesn’t look like your typical American or Japanese movie. It has its own identity, and should really make it to the list of Best Animated Film by the time Academy Awards come… even though we know there’s always only one spot left for non-mainstream projects such as this.