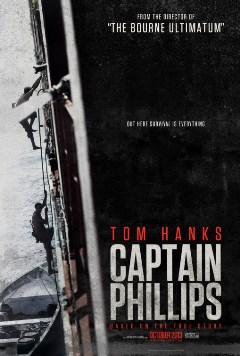 Back in 2009, the cargo ship MV Maersk Alabama was hijacked by 4 Somalian pirates. This event is notable for being the first successful pirate seizure of a ship registered under the USA flag since the early 19th century. And if you want to know more about how this happened, you can either check out the news online, read Richard Phillips’ biographical book A Captain’s Duty: Somali Pirates, Navy SEALs, and Dangerous Days at Sea or watch its film adaptation with Tom Hanks as the Captain himself.

Captain Phillips shows its protagonists and antagonist in its opening minutes before they clash at seas. While Captain Richard Phillips (Hanks) leaves his wife (Keener) behind one more time to embark the MV Maersk Alabama cargo ship with Kenya as his next destination, we also see the Somalian pirates getting ready to assault any ship in sight in order to gain money for their bosses as well as trying to get out of their poverty status.

As the ship goes through Somalian seas, Phillips notices Somalian pirates which only means danger. He manages to outsmart them once successfully, but it’s the second encounter between the ship and the pirates, led by Abduwali Muse (Abdi), that leads to the newsworthy event and a terrifying experience for the Captain in particular.

I’ll say this: Paul Greengrass succeeded for the most part at not making Captain Phillips feel restless for most of its running time by keeping its atmosphere almost constant from start to finish with its action, growing suspense and tension scenes, enhanced by great camerawork, editing and visuals that gave the film a “big spectacle” feel. However, it’s the stellar acting from newcomer Barkhad Abdi and the veteran Tom Hanks that makes Captain Phillips engaging to watch. While Abdi was charismatic and menacing as the leader of the Somalian pirates who hijacks the Alabama ship and showed that he and his fellow mates were more than just simple gun-toting antagonists and shared a common conflict, Hanks (in one of his best performances in years) shines strongly especially when everything gets worse and it seems that all hope is lost for him, something totally different from how the film’s opening minutes showed him as a calm man who kept everything in line.

Captain Phillips also presents brief strokes on globalization through the Somalian pirates and the labor union view regarding Phillips’ crew, who aren’t as well-off as he is economically, but it’s the initial set-up and decisions from Phillips’ company that actually resulted in this hijacking event. Of all the things that happened in the film, that last point stuck in my head more than anything else. It’s a giant head-scratching thing considering how everything went down thanks to something that could have been easily prevented and not ending with something totally overcomplicated. But if that mistake didn’t happened, I wouldn’t be able to enjoy Captain Phillips for its strong performances and Greengrass’ take on the subject, which was really great at providing the film with more life shell than its apparently simple “ship assault” premise.