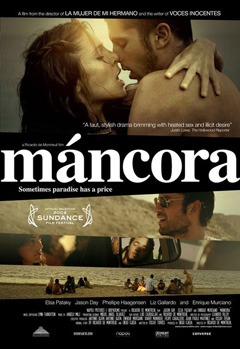 Mancora tells the story of Santiago, a 21-year-old Limeño who parties a lot and just doesn’t care about life at all. One early morning, his dad commits suicide, so Santiago is forced to re-evaluate his life.

First things first, I really admire de Montreuil for his visual style, which is present in the music videos he’s directed [Andrea Echeverri’s Baby Blues from the La Mujer de mi Hermano OST] and his debut film. So just as the aforementioned, Mancora doesn’t disappoint visually.

Technically, Mancora is great. Cinematography, color treatment… the underwater scene is beautiful to watch. However, if we get into the story, there’s nothing for us to chew on. According to them, the film is marketed at 20-somethings to nearly 30-year-olds who will “relate” to the story. So that means me. Either I’m 23 going on 32, or the film is better suited for 16-year-olds with existential crises.

The main character never truly develops, while the supporting characters never leave the page as real people and just play the part like the grim cartoon version of what could have been~ Yes, we could have told this story in a year, we could have had more time to develop the character, but we only had 100 minutes. It doesn’t matter, this whole “you can’t develop a story in this amount of time” means nothing when there are films that have the protagonist meet a bunch of people, and the bunch of people can still leave a mark on you. Case and point, Into the Wild.