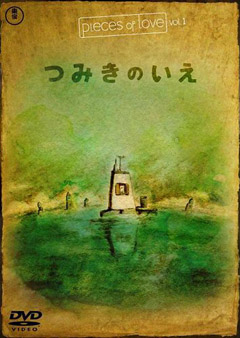 Tsumiki no Ie, or La Maison en Petits Cubes, is a Japanese animated short, winner of a 2009 Academy Award. It was directed by Kunio Kato, who thanked the Robot Communications company by saying, “Domo arigatou, Mr. Roboto”.

The 12-minute short tells the story of an old man living in a town flooded by water. One day, he wakes up to realize the water level is rising, so he begins building on top of his house, brick after brick until he makes a place almost exactly the same as the one he’s got… only smaller.

The old man moves his things one floor up, and is about to finish moving his furniture, when he accidentally drops his pipe into the water. He thinks he can replace it, but as soon as he realizes there’s no other pipe for him — he sees a diving suit, so he does the same thing everyone would do in his situation… get the diving kit and get the underwater pipe.

Underwater he recovers his dear pipe and uncovers forgotten memories of his wife, children, and his own childhood, all told through his journey to the bottom of the ocean, where once was a town with trees. Some people may see this as a subtle commentary on global warming and what-not, but in reality, what makes Tsumiki no Ie so great is everything else. The animation done in classic 2d with less than perfect coloring gives it textures and a great mood that mixes so well with an excellent soundtrack by Kenji Kondo.

There’s also a rumor saying that there’s another version with narration by Japanese actress Masami Nagasawa, but frankly, I don’t give a damn. This short doesn’t need words to show us any more depth than it already has.

You can watch La Maison en Petits Cubes on CrunchyRoll.