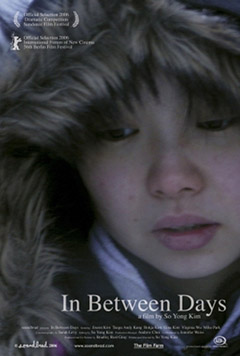 In Between Days opens with an emblematic shot of its downcast teenage protagonist, Aimie (J. Kim), a newly arrived immigrant from South Korea, trudging through the snow against the gloomy, if striking, backdrop of gray morning skies. Debutant feature director So Yong Kim knows how to use the weather and natural light to depict emotional states. And Aimee’s dislocation certainly goes beyond the physical.

Her relationship with her single working mother (B. Kim), who is possibly just as forlorn as her, is strained at best; Aimee fears that she is trying to replace her beloved father, who lives back in S. Korea. So Yong Kim’s background in experimental filmmaking makes its presence felt during the formalist tableaux of moody horizons to which Aimee’s ruminations to her absent father are set.

Although possibly a byproduct of her increasing loneliness, what’s troubling Aimee the most, however, is her unrequited love for her best and only friend, Tran (Kang), a delinquent Korean transplant who happens to be a few steps ahead of her on the path to assimilation. The delicate dynamic that exists between them forms the heart of the film.

So Yong Kim, who based the story partly on her own childhood experience of moving from S. Korea to Los Angeles as an adolescent, rigorously adheres to Aimee’s point-of-view, though; the camera is often merely inches away from her face, which is also meant to convey her sense of isolation from the surroundings. Despite only having eyes for the more westernized Korean girls, there are moments when Tran succumbs to Aimee’s subtle ploys to draw attention and becomes protective of her. But for the most part, he merely considers her a good friend, albeit one from whom he is not above asking sexual favors, thus only complicating the situation further. What exactly goes on in his head remains a mystery.

The filmmakers have tried to generalize the Toronto setting as much as possible. The goal, reportedly, was to make it look like a generic American city in wintertime. It’s hard to say what prompted this decision—the film belongs to the production company Kim co-founded with her husband, filmmaker Bradley Rust Gray, who also serves as a co-writer here—but it could be seen as a slight miscalculation, especially by those familiar with the area.

This is not only due to Toronto’s large Korean population, but also to the fact that no American city, including those nearby like Detroit or Buffalo, emanates the same texture and feel that this Canadian city does during the winter— which is something So Yong Kim has actually captured quite well on DV. A brief shot of Toronto’s relatively unique streetcar system won’t be necessary for many to know where the film was made. In many ways, this is as much of a Toronto film as Denis Villeneuve’s Enemy (2013).

The film biggest asset, however, is the subtly expressive face of S. Korean-American newcomer Jiseon Kim, through which the director has charted this exquisite coming-of-age story that relies more on inner feelings and sensations rather than dialogue or action. It’s a shame that Jiseon Kim, who won the Best Actress award at the Buenos Aires International Festival of Independent Cinema, has yet to appear in another movie.

Witness how her pale, round, moon-like face lights up upon learning that her object of affection has broken up with his girlfriend. Even when he tells her that it wasn’t because of her, she keeps hoping against hope that she is right. And there are numerous moments where she lets us feel her hurt with the most minute of gestures. In Between Days isn’t perfect, but few films have better, more intimately evoked the joys and pains associated with first love.