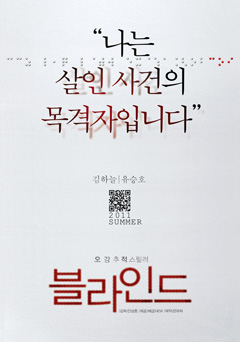 You know why Korean films tend to be quite awesome? It’s because they mix a lot of genres that shouldn’t necessarily mix together and manage to make them work.

Blind is about an orphaned young woman, Min Soo-Ah (Kim), who loses her sight after an accident where her step-brother from the orphanage, Dong-Hyun (Park Bo-Gum), loses his life. Three years after the incident, Soo-Ah is living an almost normal life as a visually-impaired woman alongside her guide dog Seul-Gi (Dolly), and trying to get back into the police academy.

One day, when she’s getting back home without her guide dog or anyone else able to see, she’s picked up by a mysterious car whose driver (Yang) is involved is kidnapping, assaulting and killing many women.

When the driver is about to dope her, he ends up running over a person and pretends to have hit a dog instead, but Soo-Ah’s keen sense can’t be fooled. When she gets to the police station, she believes she’s been a witness of a hit-and-run accident, instead of almost being the latest victim of a serial offender.

I gotta admit here that I didn’t know what to expect from a film called Blind, so when Soo-Ah has the accident in a very melodramatic (almost exasperating) way, I was prepping myself for a tearjerker. However, color me surprised when I get to watch a melodramatic horror thriller instead. Soo-Ah struggles with her blindness and the guilt over her step-brother’s death, which would be enough melodrama to turn people off — but this works.

The dramatic scenes helped build up Soo-Ah as a character, as well as her relationship with possible crime witness Gi-Sub (Yoo), who might be a punk just like her brother was. In contrast, her relationship with budding detective Cho (Jo) adds quite a bit of laughs to dissipate all the tension build-up.

And while the sick culprit is a huge element in our worrying for Soo-Ah, who can’t even see him watching her, I really think all the character build up make this ride worth it. Look, I care VERY little about animals, but other than Free Willy — or, okay, The Fox and The Hound… but Disney animals are another business — I’ve never been emotionally affected by them on film. I just can’t believe how affected I was with Seul-Gi the guide dog. Seriously, Dolly needs to get a freaking award for that performance.

The acting is all solid — as you can see, even the dog’s acting is outstanding — and the look of the film has some really nice photography. The visuals used to enhance Soo-Ah’s blindness were interesting, though it did remind me of Daredevil a little bit. However, that comparisson might be unfounded, as the only similarity between the two is that it has blind people.

Overall, Blind is a solid piece of entertainment — maybe not life altering, but completely engaging and worth the watch for those tired of thrillers that just thrill or horror films that just spook you.