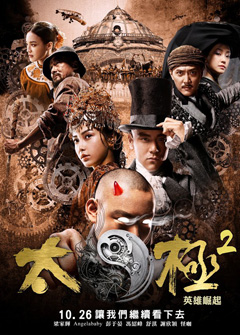 I gotta tell you that I am pure “disappoint” with the Tai Chi From Zero to Hero films. I had a little bit of hope from watching the first part in the series, Tai Chi Zero, because… I guess I was looking at the glass half full, and I did kind of enjoy the Tai Chi fighting style. However, there’s only so much Sammo Hung can do with choreography!

Tai Chi Hero picks up from where we left off with the first movie — Lu Chan (Yuan) ready to marry off Yunia (Angelababy) to get the village’s last name and avoid the curse that may befall Chen Village for teaching an outsider their martial art. On the day of the wedding, Yunia’s god-forsaken older brother (Feng) comes back home with a sneaky secret, and Zijing (Peng) is still looking for sweet payback after the death of his beloved Claire, alongside evil westerner from East India company… played by Peter Stormare (Dancer in the Dark, Chocolat, Jurassic Park II) — you read that right.

Can we just say this is the WORST use of Shu Qi on a movie EVER? She’s plastered all over the promotional material, and her character is barely a blip in the whole story and is never heard of again, never even to build up Lu Chan as a character. We basically go through the motions on Tai Chi Hero because we have to wrap things up. In the end there’s never an urgency to save Chen Village, and even less so when Yunia’s older brother comes back and makes the whole village turn against “the crazy idiot” Lu Chan for fear of the curse. All the while, Zijing stops being a threatening villain and becomes a sobbing comical loser who keeps coming back for more.

And don’t even get me started on the “romantic” aspect of the film, as we struggle to find a little chemistry between Lu Chan and Yunia. In their defense, though, Yuan Xiaochao is probably miscast in the lead role despite his martial arts abilities. The filmmakers in this series for Tai Chi From Zero to Hero didn’t need a martial artist, they needed an actor to sell us the character not the fighting. Sadly, both Yuan and Sammo Hung’s talents go almost to waste on this part of the film.

From problems in the story to pace and acting, it seems Tai Chi Hero drops the ball even more when considering it could have been a much better film with a stronger script and definitely some trimming in the editing room to make this two-part film one cohesive storyline. With production values such as this, it’s a pity it had to end this way.