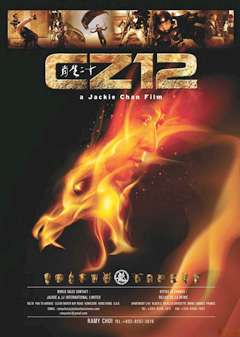 Jackie Chan does what Jackie Chan pleases, and it’s never been as true as in CZ12. Also known as Chinese Zodiac, CZ12 is Jackie Chan’s kind-of-a-reboot of Chan’s own series titled Armour of God, which puts him once again in the director’s chair, with the writer’s pen, with the producer’s hat and taking top billing as antique hunter, JC.

The closest comparison to an American film I could find was National Treasure, where a treasure hunter seeks an artifact of American historical relevance. In CZ12, Jackie Chan and his group of con artists-slash-antique hunters — Simon (Kwon), David (Liao) and Bonnie (Zhang) — are hired by the Lawrence (headed by Oliver Platt) antique auction firm to find the remaining bronze heads of the Chinese zodiac animals that were looted by the British in the second Opium War of the 1800s.

In the meantime, antique auctions enter a frenzy between antique collectors and those who oppose the auctioning of looted national treasures.

Acting, at times, is a bit cringe-worthy, considering the movie’s ability to go back and forth with dialogue in Mandarin, Cantonese, English and French… some Russian and a sequence that included lines in Japanese, Thai, and I lost track of what else they used. Obviously, Jackie Chan was biting a little more than he could chew, but the result is Chinese Zodiac is a fun adventure for the whole family, considering the peace and love message by the end of the film, which made it seem all the more like an after-school special.

Action-wise, I think it’s quite amazing Jackie Chan still keeps on doing action movies, considering he was supposed to retire a while ago. However, since we’ve failed to produced action stars of the caliber, we’ve seen a return of them all… not really at their prime. Chan’s sequences in CZ12 seem a little bit more funny than kick-ass; however, his discovery of martial artist Zhang Lan Xin is really the movie’s best feature. For the past ten years, it’s been quite easy to see women kicking butt on screen — Gina Carano in Haywire comes to mind, and with a little post help even Scarlet Johansson can kick butt on screen — but none of them do it with the killer ease that Zhang Lan Xin possesses.  If she speaks English, she could easily kick the crap out of Maggie Q in Nikita with a flick of her little finger.

People taking CZ12 way too seriously seem to forget that Jackie Chan does what he wants and that Jackie Chan has a lot of famous friends. Just like he was able to pull more celebrity names for his London Olympics song, Best Wishes from Beijing (北京祝福你) [MV], than the Beijing Olympic committee for Beijing Welcomes You (北京欢迎你) [MV], Chan seems to have done CZ12 for pure fun, getting some of his celebrity friends to cameo, and shooting all in good fun. He just happens to be making money off of his quite expensive home-made video.

I see this doing well with families. CZ12 is super clean entertainment.