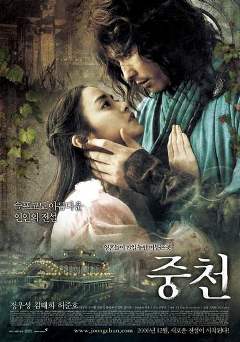 The world stands delicately balanced between peace and discord. The one aspect of our lives that manages to keep the scales tipped precariously in order is the power of the love the world’s people have for each other. A young man named Yi Gwak (Jung) finds himself the victim of the corruption and fear gripping his village during the United Shilla Dynasty of AD 924. When a rumor his fiancée Yon-hwa (Tae-hee Kim) is the harbinger of ill-will and tempestuous spirits spreads, she’s burned alive in their home. In order to fight the corruption prevailing in the village, he joins a group of vigilantes known as the Chuhyongdae. When the leader of the group, a man named Ban-Chu (Heo), and his comrades are slaughtered in an ambush, Yi Gwak must find a way to cope with the immense loss.

On a drunken binge to erase his pain, he stumbles into a sort of limbo between Heaven and Earth called Joongchun (literally, Midheaven in English). There he meets what’s known in this world between worlds as a Chuneen — one of the spirits of Joongchun that protect and govern those waiting for reincarnation. She bears a striking resemblance to his murdered fiancée. She holds the key to immense power in her grasp, a stone that the fallen Ban-Chu covets in order to exact his revenge on the world that betrayed him. To protect the memory of his lost love and thwart the twisted vengeance of his former captain, Yi Gwak must fight through his past loyalties and prove love prevails over everything else.

What really captured me and left me breathless about The Restless is its landscape. The color and sheer boundlessness of it is impressive. The way the director captures such simple moments as a sunset falling over an expansive plain or the wind casting jagged ripples into a shallow river touched me in a way that such boldly photographed films in the past haven’t. It’s the type of photography that’s vast, rich. It’s a completely emotional style of direction that speaks to the poignancy of the story and the pain and beauty of each character.

The Restless is such an exquisitely shot film, it can be easy to miss some of its shortcomings. Random leaps in time and setting muddle the depth of the film and cause it to seem rushed in pertinent spots. Though it’s grander than a film like Crouching Tiger, Hidden Dragon in both scope and elegance — the fighting sharper than its stylistic predecessor, with a more diverse use of action sequences — there were times when the wire work became egregious, characters leaping stiffly from building to building, seeming more like CGI transfers, and stretching a viewer’s suspension of belief. However, even such missteps can be forgiven in lieu of the broader scope of the film.

It may be my lack of experience with Korean cinema, but I can’t deny that The Restless is one of the most gorgeous films I’ve ever seen, both in terms of its tragedy and its unparalleled visual elegance. It may have fallen short in terms of the sheer magnitude of what it was attempting to do cinematically, but it still managed to create stunning snapshots and sweeping bits of art.