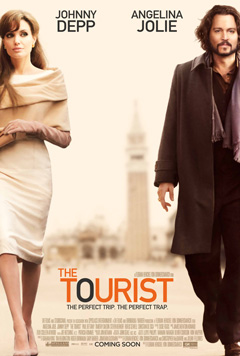 Let me start off by saying that I don’t just watch bad films, which it looks like I do from the string of films I’ve been reviewing. Also, I do have a soft spot for Angelina and Johnny, so I really couldn’t pass this up.

But… Florian Henckel von Donnersmarck — I’m just going to call you Florian — what was up with this movie? Really? After The Lives of Others, The Tourist is your next film? Are you trying to be totally left field so you don’t get pegged as a Nazi Germany story type of director?

The Tourist follows sexy rich woman Elise (Jolie), who happens to be followed by British Intelligence Service because they’re looking for the man she loves — who happens to have stolen billions of dollars from the mob, and owes millions in taxes…

First, if you steal money from mob bosses I hardly think you need to pay taxes. Hence the whole “stealing” business. Anyway, without taking into consideration how the film needed you to believe its plausibility, I did laugh. The problem is… I don’t really think I was supposed to laugh. It’s certainly not labeled a Comedy on IMDb — maybe the Globes did get its nomination right~

The action and the romance in the film is funny too, but there’s just so much you can do to actually end an action/thriller in a believable way when throughout the film there’s nothing but laughs. At least in the Jolie’s previous take on the romantic comedy action genre, she had sizzling chemistry with Brad Pitt which turned Mr. & Mrs. Smith into a sort of gossipy movie you just HAD to watch.