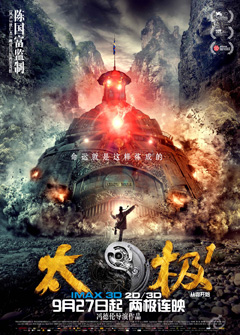 Sammo Hung has choreographed some of my favorite fights in the past four years — I mean, DUDE! Choreographing both Donnie Yen’s Ip Man movies is enough to shoot right to the top of the list of favorite action sequences, so it was interesting to see what he could do with Taichi as a fighting style because he will have to deal with people’s preconceptions that Taichi is old people’s aerobics.

In Tai Chi Zero, the first part of the Tai Chi from Zero to Hero movies, screenwriters Hsia-tse Cheng and Jialu Zhang (Detective Dee) join to tell the story of Lu Chan (Yuan), a boy born under unusual circumstances with a sort of mole on his forehead that causes the local children to mock him. However, he discovers that the mole enhances his fighting abilities, much to the surprise of his mother (Shu Qi, in a cameo).

As a soldier used for his fighting abilities, Lu Chan’s life is threatened by the deteriorating state of his mole, which begins turning darker as he violently fights. This is when he decides to travel to the remote Chen village to learn a more peaceful type of Tai Chi that could save his life. In the village he finds Yunia (Angelababy) and her boyfriend Zijing (Peng) recently arrived from England and wanting to modernize their traditional hometown.

Comic book transitions — reminiscent of Ang Lee’s Hulk — pop-up text on screen with comedic or rather awkward question marks, and motion graphics visualizing Tai Chi movements for the uninitiated, they all give Tai Chi Zero a computer game hyperreal flare added to the already steampunk style of the story. The style of the movie is fun, and though the action is amusing, it never reaches the level to blow people’s minds due to the lack of screen time Yuan Xiaochao’s talents get. He barely gets to fight — he is, after all, wanting to stop his fighting from killing him.

The weakest part of Tai Chi Zero, however, is that it does seem like the first half of a whole, never being able to stand on its own. We almost nearly forget about Lu Chan when we focus on Yunian and Zijing, who have a rather weak romance subplot that involves English supervising envoy Claire (Lieu), setting in motion all the destruction that will take place in Chen village. Unless it’s expanded on in the second part, Tai Chi Hero (太极2英雄崛起), it is the lamest excuse for the destruction of the village. However, the most interesting bit is when Master Chen (Leung) reveals his reasoning for involving Lu Chan against the village’s wishes. It’s almost Machiavellian of him.

Overall, though, Tai Chi Zero didn’t live up to the expectations it created with its near hyperactive trailer, as it didn’t leave us desperate to watch Tai Chi Hero… but at least, we want to finish watching it and hope for the best.

Come on, guys. Donnie Yen can’t be the last martial artist on the big screen.