Light Shines Only There, The 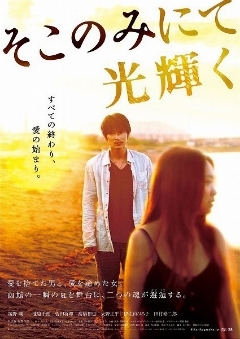 The female moviegoers among Japan’s rapidly growing number of elderly are likely to become teary-eyed after witnessing the implicit autopsy on the Japanese male offered by The Light Shines Only There (Soko nomi nite hikari kagayaku). They are bound to recall fond memories of classical-era films by women-oriented directors who knew their audience and how to employ melodrama as a vehicle for social critique. Though this film isn’t nearly as forthcoming in those terms in either tone or content, the male specimens it puts forth range from apathetic to criminal to sexually dysfunctional to mentally and physically disabled, or some combination thereof.  As was the case in many of those older movies, there isn’t much to pick from here for the opposite sex.

Directed by O Mipo, a Zainichi Korean [1] who once worked under veteran Ôbayashi Nobuhiko, The Light Shines Only There appropriately ends up centering around a disreputable woman who knows most of the aforementioned exemplary figures. In fact, it’s hard to blame her for continuing to prostitute herself while carrying on sexual relationships with at least a couple of them. She almost has to in order to keep her rotten family afloat, one for which the term wâkingu puâ (“working poor”) seems both wholly appropriate and wholly inadequate. The residence is in the kind of place where used tires and broken down appliances almost serve as adornments. The level of sordidness on display is worthy of the early new wave films of Ôshima and Imamura. Hakodate has never looked so ornery.

That this somber yet vivid drama not only isn’t satisfied wallowing in misery, which it could have easily done to possibly much more acclaim, but, similar to Pedro Costa’s In Vanda’s Room (2000), actively seeks beauty and light in both its surrounding and in its characters is perhaps its greatest virtue. Depending on mood, setting and character, the color palette employed by Ms. O and DP Kondô Ryûto (a favorite of Yamashita Nobuhiro) ranges from expressively saturated (some of the nighttime scenes recall Edward Hopper) to more subtly shaded.

And the performers certainly play a large role in both illuminating their characters’ painful and complicated souls and making their actions relatable no matter how deplorable they might be. None more so than a typically brave Ikewaki Chizuru, one of the finest Japanese actors of her generation, whose hard-nosed turn here recalls a number of similarly hopeless yet defiant women trapped by family and society that were once essayed by legendary actress Takamine Hideko. Her own sense of dignity as a woman is reawakened by another lost soul (Ayano Gô). She responds by buttoning up her blouse in his presence on one occasion and repeatedly hitting him on another after he discovers her profession.

Newcomer Suda Masaki is almost equally impressive as Ikewaki’s volatile yet good-natured younger brother who proudly sports a similar kitchen-sink dye job as hers. His character’s quirky looks, questionable hygiene, and boundless energy recall nothing so much as some punk from a yesteryear’s anime. This only makes it harder to believe that Suda is the same actor who practically sleepwalked through Aoyama Shinji’s not uninteresting but dramatically lax and politically suspect Backwater (2013), which dealt with some of the same themes.

That film took place in 1989, which is when author Satô Yasushi wrote the novel The Light Shines Only There is based on. He committed suicide a year later at the age of 41. Ms. O has chosen to update the setting to the present day but she clearly hasn’t compromised on Sato’s vision or the work‘s moral and psychological complexity. No other national cinema has shared a closer relationship with its respective country’s literature than that of Japan. It’s in big part responsible for arguably its two greatest periods, the 1930s and the 1950s. I’m pleased to see a young filmmaker such as Ms. O carrying on the tradition and spirit of those films, in more ways than one.

The Light Shines Only There will have its U.S. East Coast premiere at Japan Cuts 2015 (1)