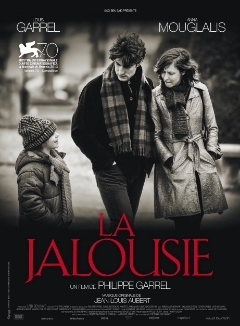 In a striking moment early on in Philippe Garrel’s typically intimate and moving new film, Jealousy, Claudia (Mouglalis), a struggling theatre actor at the end of her tether, tries to prevent her partner from leaving the apartment by entrapping him with her legs. Though he sees it as nothing more than a playful act, her reactions suggest that she is only half-joking. “I’m not down, but I need consoling,” she had just told him after receiving more bad news, but he decides to leave. Whether he does so deliberately or out of sheer inattention, she remains unsure. And so do we, even if we can relate to both of them and their predicaments. Few filmmakers have depicted the mysteries of men and women more profoundly than Garrel.

Mouglalis is simply heartbreaking here. Though still an arresting presence, the angular beauty has lost the almost ethereal quality she once projected. In other words, she would not have suited this role a decade ago. Now at 36, with a deep furrow between the eyes that looks like a scar and an already husky voice lowered to a whisper, she seems perfect to play this nervy, slightly unhinged Mayakovsky fan. At one point, she simply walks away from a meeting and runs home under the delusion that her companion has left her. At another, she decides to leave with a random stranger at a bar. Garrel accomplished something similar with a now aging Monica Bellucci in his previous effort, A Burning Hot Summer (2011).

For the third Garrel film in a row, the lead happens to be his son, Louis Garrel, who plays, well, Louis—not himself but his grandfather, Maurice, the great actor whose recent death inspired this film. Moreover, Louis plays his grandfather at 30, the same age he was last year when the film was made. And Garrel’s daughter, Esther, plays Louis’s sister in the film. But this is not a nostalgia-driven period piece. There is never a sense that Garrel is sympathizing with one character over the other. As it is often the case with his work, however, the black-and-white cinematography—here by Willy Kurant, who shot Masculin Féminin (1966) for Godard and Under the Sun of Satan (1987) for Pialat—and his typically restricted geography give the film a timeless feel. What Tarr Béla once said about the agelessness of his own work applies equally to much of Garrel.

Jealousy contains a number of other Garrelian themes and motifs: suicide, phantasmagoria, the struggle between individual freedom and responsibility. His customary hermetic interiors also get used as a dramatic thread. “I’m sick and tired of living here,” Claudia once tells Louis, the aforementioned partner. “It’s ugly and depressing. I need light.” But if this film on the whole feels slightly warmer, more buoyant than his previous concoctions, it is due to the presence of an affectionate young girl, the daughter of Louis from an earlier relationship. Garrel has never allotted as much screen time to a child before. The fact that he himself happens to be this girl is all one needs to know. In the opening scene, in which Louis is leaving the girl’s mother, there is even a point-of-view shot of them through the keyhole.

For the first time in his career, this film features Garrel with three other screenwriters, including wife Caroline Deruas and the former companion and collaborator of Pialat, Arlette Langmann, whom he has worked with since Night Wind (1999). There is another Pialat connection in the form of editor Yann Dedet, who once cut one of Garrel’s greatest achievements, I Can No Longer Hear the Guitar (1991). At little more than 75 minutes, Jealousy is even more elliptical and pared down than what is generally the case with Garrel. This renders his unique aesthetic of snatching moments from the ongoing flow of life all the more palpable and resonant.