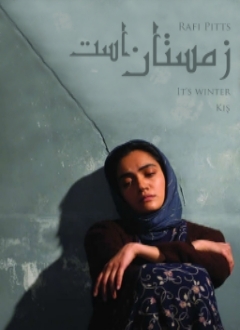 Late in Rafi Pitts’s remarkable It’s Winter (Zemestan), two generationally separated men, both beaten down by their hardscrabble, working-class lives, are seen sitting in the same shabby tavern where they have spent many a lonely winter night. From what we have already deciphered from his predicament, the younger individual is unwittingly about to court the same path that proved calamitous for the older, now derelict one, who, for reasons all his own, is in no position to impart any advice to his counterpart.

A typically ephemeral yet affecting moment in this broodingly austere creation, which belongs to a small group of recent films that have diverted, both aesthetically and thematically, from the well-trodden path Iranian cinema has followed over the last two decades or so. Indeed, early on, in an almost neo-noir fashion, a young, seemingly unscrupulous drifter blows into a small, snow-covered industrial town on the outskirts of Tehran. This slick-haired, rebellious sideburns-sporting lad could also be seen as an anomaly from the pathetic types usually encountered in Iranian films, as he appears to be someone who’s well capable of leaving with both your partner and your money. The instinctively charismatic Marhab (Nicksaulat) initially finds it difficult to get off the ground, but his situation changes once he befriends an impassive local mechanic (Orkani) after meeting him at the tavern.

Meanwhile, a glum yet striking young woman (Hajjar), a seamstress introduced earlier in the proceedings, ends up catching his ever-wandering eye. Marhab follows her home to a remote area near the railway tracks. He discovers that she lives in a state of poverty with an adolescent and an elderly female. After getting a grasp on her situation, Marhab impulsively decides to propose to her.  Shot from the point-of-view of his inamorata, and managing to evoke hitherto unfamiliar emotions with regard to our protagonist, Marhab’s tender monologue causes her to make a choice that is at once unassuming and startling.

Those adjectives also apply to Pitts’s mise-en-scène, which displays more of an affinity with the spare and poetic work of Nuri Bilge Ceylan than with that of this half-British filmmaker’s Iranian cinematic forefathers (save for Sohrab Shahid Saless’ 1974 masterpiece, Still Life). Perhaps the fact that Pitts not only studied film in London but went on to assist the likes of Leos Carax (on 1991’s The Lovers on the Bridge) and Jacques Doillon (on 1993’s Le Jeune Werther) opened him up to new and fresh possibilities. That said, the use of non-professional actors, a reserved narrative language, rhythmic editing, etc., all fall in line with Iranian cinema traditions of the past and present.

And with its blue-collar milieu, a keen interest in the textures and physicality of manual labor, and real, unadorned depiction of the impoverished working-class, the film could be further linked to the cinema of the Dardenne brothers, not to mention such contemporary works as Laurent Cantet’s Human Resources and Pablo Trapero’s Crane World (both 1999)—one wishes for more worthy fiction films in this category. To its credit, it eschews the sort of faux-sermonizing that often mars such efforts (Loach’s 2000 Bread and Roses and Fernando León de Aranoa’s 2002 Mondays in the Sun come to mind, among others). The shots of hard, weather-beaten faces, often belonging to young unemployed men enduring cold nights under bridges, speak volumes regarding the current situation in Iran. And, as Mehdi Akhavan Saless‘ haunting poem allegorically forecasts, the winter is long from being over.