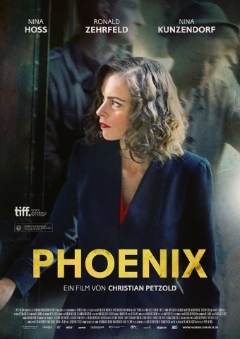 While discussing Nina Hoss during an interview for one of his earlier films, Christian Petzold stated that she has “a kind of situational intelligence that allows her to grasp the situation both physically and emotionally, and she does not actually simply express those things through acting; it is happening on the inside.” Petzold certainly puts her to the test in his complex new film, Phoenix, his sixth collaboration with Hoss.

She plays a disfigured concentration camp survivor named Nelly who returns to Berlin in search of her husband (Zehrfeld, who previously worked with Petzold in 2012’s Barbara) who may or may not have betrayed her to the Nazis. Despite being warned to the contrary, to her he is innocent until proven guilty and she does everything she can to discover the truth.

There’s a lot of history here, not only socio-political (in terms of the alienation experienced by Holocaust survivors and the reconstruction of identity, a favorite Petzold theme) but also cinematic, both subtly woven into the narrative fabric. Though the film visually and thematically evokes such classics as The Murderers are Among Us (1946), The Face of Another (1966), The Marriage of Maria Braun (1979), and, especially, Vertigo (1958), it remains a Petzold creation through and through.

Other than the more expressionistically rendered nighttime scenes involving a cabaret, where the protagonist ends up finding her husband, the style is as typically minimalist as the majority of the settings. The same applies to the elliptical narrative largely devoid of dramatic fireworks. And, as with his earlier films, it can’t be pinned down in terms of genre.

Phoenix isn’t perfect: a flashback or two of a pre-reconstructed Nelly could have made the husband’s reaction upon seeing her more believable (he not only fails to recognize her but tries to involve her in a scheme to rob his “dead” wife). As Petzold proved with the ending of Jerichow (2008), however, he’s not afraid of employing common movie tropes in a straightforward, non-ironic manner. He could have also done more with the character of Nelly’s friend (Kunzendorf), who at one occasion pointedly remarks about the tendency of the Jewish victims to forgive their perpetrators.

These are minor quibbles, though, and most will likely forget about them by the time the film comes to its stunning conclusion. Loosely adapted from Hubert Monteilhet’s 1961 novel Le Retour des Cendres, this final collaboration between Petzold and his late, great friend and mentor Harun Farocki is one of the best films of the year.