Life of Fish, The 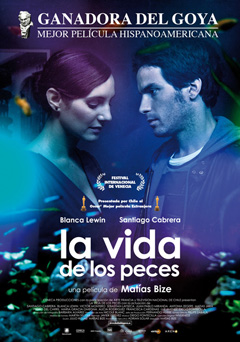 The Life of Fish is a simple film that follows 33-year-old Andres (Cabrera), who works as a travel reviewer, who’s back in his hometown after not seeing his friends for the past ten years. He’s disconnected, and possibly full of regrets as he tells his old pals when he describes himself as a tourist always on the move.

His biggest regret is Beatriz (Lewin), his ex, who is also at this little get together.

A film like this relies solely in the chemistry of their leads and their interaction. For the most part, there is this wonderful electric tension between Andres and Beatriz. We don’t know yet, whether we want them or not to get together, that’s left until we know more about them as the story progresses.

The house where everything takes place is almost like a character in itself, a vial that haunts Andres with memories of what happened between him and his friend, which has nothing to do with his relation with Beatriz but it goes with the theme of regret. We’re hinted at it several times for half the film, but we never get much out of it except for a nice scene in which Andres talks with the maid who’s seen him and his friend grow.

Besides showing an aquarium with fishes, The Life of Fish title mostly refers to watching how fish live in a tank. We’re spectators, but we’re never part of it. That’s Andres, he made a terrible decision ten years prior and he’s suffering from it. He witnesses his friends who are married with kids, jobs and mortgages to pay, yet he sells the little properties his parents left him, and has no attachments. It’s all great post-quarter-life crisis, accompanied with some very nice composition and lightning, as well as a compelling score — that sometimes overpowers the scenes, but makes for a nicely styled experience.

There’s a problem with Andres and Beatriz’ interaction that cracks the film, however. He hints to wanting to be with her mixed in with a little concern to see how she’s doing, and she really did move on. She didn’t sit there to wait for him to get his crap together, she moved on and lets him know, yet he still kept on insisting promising a start-over. Nevertheless, the ending is cruel — maybe it wasn’t intentional, but it makes Breatriz look like a b!tch… even if Andres was a total screw-up back in the day. It really hinders the result of the film, depending on where you wanted the film to go. Romantic films are seldom anyone’s cup of tea, and if you’re looking for it here, you may be disappointed.

Haters of the genre may find a lot to like here. There’s some great acting in there, specially whenever they weren’t rambling on, and stuck to those silences with long-ish shots of them looking but not looking at each other, it worked. Believe it or not, that was when their chemistry worked the best.

Don’t miss out the shows of The Life of Fish at the 2011 Lima Film Festival: