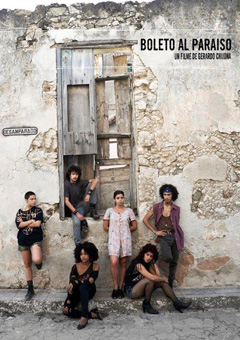 Boleto al Paraiso starts off with Eunice (Cejas) a teenage Cuban girl living with her abusive widowed father (Garcia). One day, when she can’t take it any longer, she escapes and meets an inadequate — “frikis” (freaks) — bunch of other teenagers, one of them called Alejandro (Medina).

The bad boy is trouble, but seems like a good person — alongside the rest of them they seem more like a family than hers feels like until the day when it all leads them to destruction.

To be perfectly honest, Boleto al Paraiso starts really quite well with Eunice getting caught for stealing money. We don’t know what it’s for until we see the type of relationship her father has with her so we are more than happy when she does get away and meets this bunch. Alejandro is truly a bad boy right from the start — he even reminded me of James Franco but less stoned and super skinny. We meet him stealing meds from the local clinic, but he seems young and is quite the charmer, maybe it’s because he’s got two buddies, one of them the spunky Lidia (Matos) who points out that they stick together because they are family… but of course they’re not.

The buddy film of inadequate youth turns dark, and let’s just say it – emo, especially when an AIDS-ridden friend comes into the picture with the fake tale of the wonderful life at a sanatorium. Life is so unbearable for this bunch — or at least, most of them — that they think it’s a brilliant idea to get infected and live in their personal paradise hotel. However, this is not the worst, this is just part of the melodrama.

This “ticket to paradise” comes crashing for Alejandro, of course, but instead of going alone he takes down Eunice with him in a ridiculous scene in which she willingly gets infected, and then some more. Because she loves him, and she’s got no one else — which she did, making her whole situation all that much more unnerving.

Of course, Boleto al Paraiso is a Cuban film like we never get to see. We get glimpses of its society, especially for those who’ve never been there, and it shows us how this troubled group of people tried to cope with it all. However, films should be about human stories, and the relationship between Eunice and Alejandro seemed to be the anchor, but their resolution leave us with a distasteful aftertaste — and sorry for the horrible Twilight comparison, but even if Edward is a vampire that glows, Bella shouldn’t have been turned.

Ticket to Paradise is part of the 2011 Lima Film Festival: