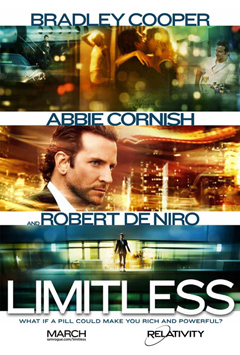 Limitless takes place in New York City and follows Eddie Morra (Cooper), a book writer who has recently been dumped by his girlfriend Lindy (Cornish) and is currently suffering from writer’s block, as he can’t even start to write a book and fails to meet the deadline to turn it in. One day, Eddie stumbles upon drug dealer Vernon Gant (Whitworth), who offers him a free sample of a pill that can enhance his brain power to function at 100%. Assuming nothing can be worse than his current life, Eddie tries it without expecting much from it. However, the pill works like a charm: he finishes writing the book in 4 days, increases his knowledge, starts making a lot of money out of the stock market and recovers his girlfriend.

Life seems grand for Eddie, but as his success grows, he draws the attention of suspicious people. Businessman Carl Van Loon (De Niro) wants to work with Eddie and uses him to secure a deal with one of his rivals. There’s also Gennady (Howard), a Russian mobster who loaned Eddie money before his big rise to fame. One thing worse than attracting attention from those guys for Eddie: side effects from not using the pill starts to appear and threatens his life, while he’s running low on the pills.

“I learned to play the piano in three days. Math became useful. And fun. Even half-listening to any language, I became fluent.”

Based on the book The Dark Fields by Alan Glynn, Limitless explores the premise of what one person could do without limits on the brain, functioning at full capacity. Some of the visual effects for the pill use Eddie ges through are good. Director Neil Burger (The Illusionist) does a good job in keeping your focus on the film from start to finish. Bradley Cooper serves well as the film’s main character, Abbie Cornish is alright and Roberto De Niro’s performance as an intimidating businessman is actually good and has good chemistry with Cooper. Despite the premise of Limitless being intriguing, the film suffers from illogical gaps that are easy to be noticed while watching the film and even makes Eddie look like an idiot while under the pill dosage.

If you get a loan from a mobster and quickly double the money loaned and gained more, you would pay back the money to the mobster instantly, right? Somehow, Eddie doesn’t and creates himself an unnecessary enemy. The film’s ending is questionable considering the information we learn about the use of the pills in regards to Eddie. Watching the film will most likely leave you with more questions than answers that aren’t exactly solved here.

Limitless can be actually entertaining to watch and Cooper’s performance is great. Yet, it suffers from the scripting to a certain extent along with the illogical gaps. The ending of the film is kinda unsettling and the premise could have been polished in a better way.