Colors of the Mountain, The 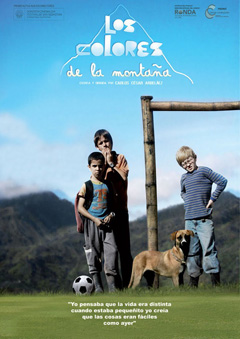 The Colors of the Mountain follows the story of a little kid named Manuel (Ocampo), who’d just turned nine years old and had been given a football soccer ball and a pair of goalie gloves, because Manuel lives for football with his friends Julian and Poca Luz, and he also lives for drawing the scenery of his town.

This Colombian film seems like it’s about nothing at all, and it is because we see everything that goes on from the point of view of Manuel and his friends. His town is in the middle of the conflict between the Revolutionary Armed Forces of Colombia (FARC) and the state’s military forces, yet we follow Manuel as he tries to retrieve his football from a most-likely mined zone, or listen to Julian talking about the different types of bullets in his collection. It’s a grim reality looked through the eyes of children, which is something not foreign to reality- Spielberg’s Empire of the Sun being the most prominent one.

It is unclear whether the town supports the FARC or the government, some of them leave the place right away as things begin heating up, while Manuel’s father makes a stand to stay, despite his wife’s best effort to get away. Julian’s brother is said to have left home to be a revolutionary, but that’s as much as we get. In that sense The Colors of the Mountain remains as neutral as it possibly can, but in doing so it becomes less unengaging.

The acting is fair, Hernan Mendez as Manuel’s father is quite frightening at times, but his character is never explored leaving us not really caring about what happens to him — despite his best intentions. Hernan Mauricio Ocampo has the tough task to carry a film that’s really not about him, but about what goes on around him. He’s an spectator, but his best scenes are probably the ones with the new school teacher. Newly arrived from out of town, she is eager to teach these kids and make a change, fronting like strong person. However, when trouble arises, it’s all too tough for her to bear and it really is just too much for anyone in any situation. It’s so much that when the time comes, she never really turns back to see him. It seems like it breaks her, and in turn we might also be broken.

The ending of The Colors of the Mountain is, of course, grim… and emotionally empty — almost like a mirror of how the teacher felt and acted like, but we all knew it had to happened sooner rather than later.

The Colors of the Mountain is part of the 2011 Lima Film Festival: