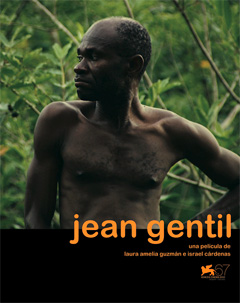 Jean Gentil is the story of… well, Jean Remy Gentil — a French teacher from Haiti who loses his job, and sets off to Santo Domingo (Dominican Republic) to find anything to be able to make ends meet.

The film and subject matter are terribly dreary, having a man who used to work as a teacher, had education, and papers to prove it, walking around everywhere possible to be able to find any suitable work is anything but a cheery subject.

However, Jean Gentil is… well, gentile. He’s soft spoken, and is planning to reconnect with his religious roots in the hopes that everything will turn out, somehow, for the better. He meets people, some willing to help more than others. Most of them are a good bunch of people in average situations, but definitely better off than Jean, who feels everyone is living life but him.

Somehow he ends up living in the forest by himself, living off nature, and the film lends itself for some beautiful frames and scenery, almost as if Jean had finally found his place within God’s creation. However, he carries a secret that’s eating him inside and cracks open as everything begins turning around.

The film actually grows on you with time. I can vouch for it. I enjoyed it more with my second watch than I did my first. Of course, that’s hardly ideal to watch a film at the theater or at a film festival. Jean Gentil is also one of those films you have to be in the mood for because all that’s happening to Jean are things within himself that might or not engage the audience. This is typical art house fare that may not gather many commercial viewers, but if one is already into this type of film, it might prove to be an experience.

Jean Gentil is part of the 2011 Lima Film Festival:

Jean Gentil is also part of the Melbourne International Film Festival:
MUBI.com is offering a FREE stream until August 7th (subtitles in English ONLY).