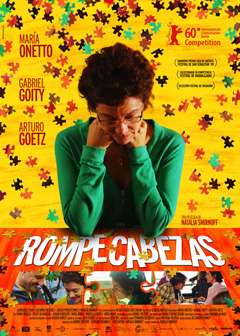 Puzzle tells the story of Maria del Carmen (Maria Onetto), a housewife who has just turned 40-ish, and has spent the last 20 years of her life worrying about her husband and two sons — who are now about to leave the nest. On her birthday, she receives a puzzle as a gift, and finds out she’s got a natural ability for them. Maria del Carmen decides to answer an ad of a man who’s looking for a “puzzle partner” to compete in the puzzle championship in Germany, despite her family’s discontent for her new hobby.

The film starts like this, Maria del Carmen is busy making snacks and a cake for what’s obviously a birthday party. Later that day, her house is filled with relatives we will never see again, everyone is talking and eating while Maria del Carmen is still busy with party chores, like slicing the salami and serving it up. Finally, the lights are out and Maria makes her entrance carrying the cake with the candles, while the people sing Happy Birthday. Maria sets the cake on the table, and blows out the candles herself. It was her birthday, and it makes the viewers see how much her family under-appreciates her.

Puzzle is a light dramedy about a woman who decides to put herself first, after years of putting her family’s needs ahead. It just so happens to be a slight obsession on puzzles, which is somewhat hilarious. World puzzle championships? Right, we couldn’t believe it either.

She begins training for a world-known puzzle championship with Roberto (Arturo Goetz), who like Maria, has a knack for puzzles. While she meets with him at his luscious place in the city, telling her family she’s visiting an aunt, her Taichi-practicing husband finds it somewhat annoying that she keeps forgetting the cheese, and her youngest kid begins dating a vegan, who’s obsessed with how much pain a fish feels when getting caught.

Puzzle is full of charm, and Maria will surely remind everyone of their mothers — especially if they don’t have a grasp of technology. E-mail, anyone?