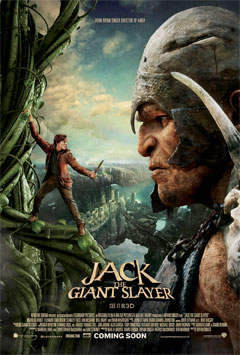 Jack the Giant Slayer joins the list of revamped fairytale movies that is so in vogue in Hollywood right now. And while this was as empty entertainment it wasn’t bland at all.

It starts when the protagonists, Jack the peasant (Hoult) and Isabelle the princess (Tomlinson), are children, and are listening to a bedtime story by their father and mother respectively. A story about magic, giants and battles. Both are fascinated with the story and both want something different from what they have. Ten years later, their lives’ parallels are still there and represented once more by cutting scenes of what’s simultaneously happening to them. Classic move but well done. And then the magic beans happen, spreading up and taking Jack’s home with Isabelle inside into the giant’s realm. A small group of the King’s men, and Jack, goes to rescue her. Said group includes badass Elmont (McGregor), the leader of the king’s guard, and jerk Lord Roderick (Tucci), king’s advisor and Isabelle’s fiancé. And then things get worse.

The movie itself is full of adventure and there are very few slow parts. The story ends up very straightforward that way, without many complications, and obviously for kids. That said, there were lots of violent parts, and it was quite dark at moments. But those were mostly implied than shown, and whatever was shown was bloodless. And then there was the main battle, which was totally the Battle of Helm’s Deep for kids, and it was awesome.

The acting was adequate and my favorite of the humans were Ewan McGregor as a very capable soldier who has a bit of gallows’ humor thing going on with his second-in-command Crawe; and Stanley Tucci, who was the kinda hammy usurper, who had the dark brand of humor with his attendant Wicke, who was a cartoonish psycho.

The other character I liked was Fallon, the giant’s two headed leader. Even if the CGI giants weren’t very realistic (I guess they didn’t want to scare the kids that much), Fallon’s right head looked more human-like and was the better actor of them all. Also, he was Bill Nighy. The left head was a good counterpart though, and always tried to interact and made himself useful even if he was mostly unintelligible. In general, giants may have had their moments of comic relief, but were also shown to be cunning enough in order to make them believable formidable foes.

I may be slightly bitter the movie wasn’t Jack the Giant Killer, and I believe its “PG-13” rating did it a disservice. But in the end, Jack the Giant Slayer was still an entertaining movie, and that’s what it wanted to be.