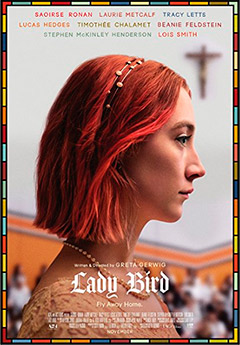 Lady Bird is the solo directorial debut of Greta Gerwig, and it’s a good one! Getting the total control of the creative process worked pretty well for her, both as a writer and an actor’s director.

This is the coming of age story of the teenage Christine McPherson (Ronan), who prefers to be called “Lady Bird”, who would love to study on the East Coast, specially to escape her native Sacramento, CA. This is also a story of a mother-daughter relationship, where these two strong personalities clash hard because of their different world views and stages in life.

This film is set between 2002 and 2003 where 9/11 was still a fresh wound in USA and the tension in the Middle East is shown through daily updates in the news.

The depiction of Lady Bird’s teenage girl experiences is done painfully well with all the troubles with family, friends, school and boys. The cringe-worthy moments were not over the top and the balance between the drama and the humor was near perfect. While we can’t all relate to her experiences, it’s done with an honesty and realism that left me wondering if this was kinda biographical for Greta.

Saoirse Ronan is amazing at depicting this very real girl who can be misguided and at times unaware of other’s people’s problems but who’s basically a good person. The best performance besides Saoirse was Laurie Metcalf as Lady Bird’s mother. Their interactions together were so raw and down-to-earth. And maybe it is because I am of certain age, but I felt I could related to both characters, as an adult with responsibilities, and as someone who still remembers how sensitive can teenagers be.

Then again, there were no weak links in the cast, from her best friend (Feldstein), to her “romantic interests” (Hedges and Chalamet), the “rich kids”, her father (amazing Letts), her brother, her brother’s girlfriend, and the faculty of her Catholic school (Smith as kick-ass Sister Sarah Joan and a Henderson as bittersweet Father Leviatch). It was also interesting that the strict Catholic school was depicted as just part of life, neither negative nor positive.

The only thing I can fault this movie is that despite a great script, it had a very cliché moment of the girl trying to be someone else in order to fit with the “cool kids”, until she realizes it is not worth it. But still these moments were conveyed better than they usually are when this trope is used.

Lady Bird is a fantastic movie and I don’t begrudge all their nominations, specially the acting ones.