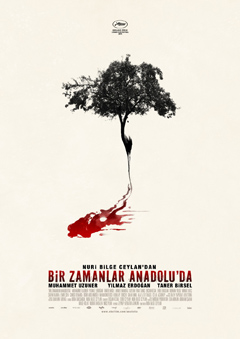 A two and half-hour long movie. Eighty percent of the time, the characters are crammed in an ordinary car and do ordinary things like thinking and chatting. Fifty percent of the time, there is silence. The purpose of their journey: locate the body of a murdered man in order to perform an autopsy. Have you given up already? Please, do not. In fact, in Once Upon a Time in Anatolia, Nuri Bilge Ceylan turns all of the afore-mentioned facts into gems.

The journey that is the central feature of Once Upon a Time in Anatolia should in theory be a thrilling hunt for a cadaver. However, we soon find out that the film’s premise is only a springboard for us to dive into the glory of landscapes, luminosity and profound reflection that surround and inhabit the characters at all times.

This movie is magnetic. The landscape of Central Anatolia is gorgeously shot: the bird eye view panoramas of the two police cars sinuously finding their way through planes, hills and rocks are amazing. The director’s use of light is just as important because it lends a fantastic and almost surreal aspect to the slightest action or object. A recurring visual theme in the movie is the characters being ignited by a golden light, in contrast to the surrounding pitch-dark nocturnal shadows. The overall effect is almost hypnotic, which draws us further into the story each character is living in his head.

There are a dozen characters who are all either policemen or judicial employees in their mid-thirties to late forties, the odd ones out being the murderer and his accomplice. The camera soon focuses on six of them, and lets us peek into their psyche. Through Ceylan’s composition choices, we do so not from an omniscient standpoint, but as if we were catching airwaves. For example, there is an amazing sequence during one of the car stops, where we hear a short monologue on the meaning of life and death while the camera slowly floats from the landscape to the character’s immobile faces.

To different extents, all the characters grapple with their guilt and thoughts about social responsibility and moral conscience. Should the truth be bluntly told out? Should it be covered or reinterpreted for the greater good? Who should decide what the greater good is? What is more important: our own peace of mind or others’ perception of us? These are universal questions, already extensively explored by philosophers, artists, judges, and common folk alike. Nevertheless, Ceylan plays a game of contrasts to pull us into the conundrum in a very non-Manichean manner. The film gives us enough room and time to really think and decide on our own about the ethics of the characters’ choices.

Once Upon a Time in Anatolia is all but conventional in its approach to rhythm, structure, visuals and subject matter. It will be a long and off-putting experience for those not ready to let go of their impatience, prejudices or expectations of fast-paced thrills. I also do not recommend seeing it when you are tired, in a hurry or preoccupied with more down-to-earth matters because the film purposely gives you an opportunity to let your mind wander. However, for those ready to see it, Ceylan’s film will be a slow but magnificent ride.