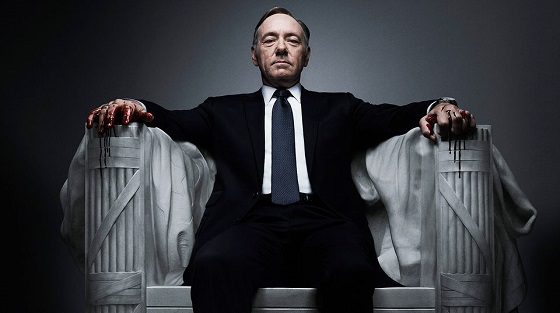 “And thus I clothe my naked villainy with old odd ends stolen out of holy writ; and seem a saint, when most I play the devil.” –William Shakespeare (Richard III)

Executive producer and director David Fincher brought us the greatest and most intoxicating remake of our time: House of Cards. Based on the Michael Dobbs novels and re-imagined from the 1990 BBC original series, this show follows the story of Francis “Frank” J. Underwood (Spacey), a cunning, vengeful and ambitious congressman who is willing to do anything and everything in order to gain power and continue his political ascension toward The White House’s Oval Office.

On this first season, we see Frank striving to survive in this hectic and dangerous world using his wit, his southern charm, and most importantly, his ability to manipulate people. After being shut down from becoming Secretary of State, he decides to bring hell upon those who prevented him from getting what he wanted, while becoming more and more indispensable for the President himself.

Netflix’s sharp-crafted piece of work elevates the political thriller genre to a whole new level, making it approachable to a wide audience. Not only are the political issues easy to understand, but also the motivations and tendencies of the main characters. So even if politics aren’t your area, you will understand what the show deals with.

Even though the entire cast delivers sublime performances, it’s Spacey’s Machiavellian portrayal the reason why we cannot stop watching this show. Delightfully evil, he stands as the ultimate antihero: we hate him, but at the same time we find ourselves rooting for him despite our best efforts not to. He’s ruthless and no one will get on his way.

Frank speaks to the camera occasionally to reveal his true intentions. He creates a special bond between him and the audience: they become his accomplices. His sarcasm and dry wit are palpable in every “interaction” with the audience, giving each scene a tone of clandestinely.

This story’s Lady Macbeth is Claire Underwood, the cold, ambitious, scheming wife of Frank. Fantastically played by Robin Wright, Claire fits perfectly into this world, as she’s strong, determined, calculating and manipulative as her husband. They are the epitome of the term “power couple”.

Shot in Washington D.C and Baltimore, House of Cards shines as a bold and unique product, with its own pace and intriguing storylines. All 13 episodes became available at the same time on Netflix, allowing customers to experience the whole season at once, starting a revolution on the way TV shows are promoted and presented.

Ruthless, addictive and highly dark-humored, House of Cards is a total hit. It seduces you in the darkest way and it leaves you wanting more and more. Intriguing schemes, lies, corruption, seduction and loyalty are the foundations on which the Underwood reign is build on. Does it have what it takes to keep on standing tall? Will it fall? There’s only one way to know. Happy binge-watching!

The first and second season of House of Cards are currently available on Netflix.