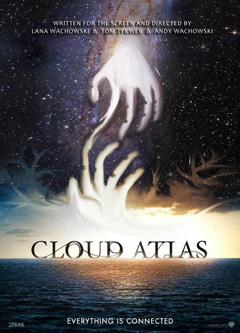 Films often try to capture the events of one story, one time period, one person, one anything, but so few take the risk of trying to do much more than that. Yet here, with an unlikely partnership between the Wachowski siblings and Tom Tykwer, we are presented with Cloud Atlas: a beautifully crafted tale of souls in motion.

Cloud Atlas is split into six stories, each focusing on one or a few of these souls. Spread all throughout time and space, the film explores the intimate details of each of their many lives and the strange impact that their actions have on the lives of those near them in past, present, and future.

As stories and times change, so do the people that inhabit them, and each story that seems unfinished finds its way to a fitting ending.

While it sounds like a troublesome concept, Cloud Atlas does an excellent job at depicting the connection between these souls throughout the six time periods shown. Each actor takes on multiple characters, each with a different personality, and sometimes age, race, and even gender. There is some really stellar make-up work to thank for this. A few characters were notably unconvincing, but it’s clear how much time and effort was put into making sure each actor could inhabit the form of any man or woman they so needed to express the connection in the only way they could.

It’s easy enough to guess that the Wachowskis would tackle the sci-fi/fantasy neo-Seoul period and the post-apocalyptic future beyond, as it is what they’ve done time and time again in the past, but they do a deft job when in the 1800s as well. Tykwer’s segments all perfectly capture the essence of their respective time periods, and it is with his look at the tale from the 1930s that I found myself truly entranced by some masterful storytelling and relationship development.

Boasting an enormous and racially diverse cast, Cloud Atlas abounds with talent. While Tom Hanks delivers his best work in some time as six different characters, there is a lot to be said for the rest of the cast. Hugo Weaving’s devil and assassin along with Doona Bae’s self-aware clone are among the more interesting characters, but the true standouts are Ben Whishaw and Jim Broadbent. Whishaw’s work as Robert Frobisher is one of the most touching of the timelines, dealing with his romance with Rufus Sixsmith (D’Arcy) and his compositions — one of which is a gorgeous piece composed by Tykwer himself for the film along with Johnny Klimek and Reinhold Heil. Broadbent not only complements Whishaw’s performance during his timeline, but provides the film with hilarious comic relief in what could only be described as “The Great Nursing Home Escape.”

Great acting and storytelling aside, something must be said about the gorgeous set and costume designs featured throughout. From the trailer alone one can already see how stylistic the film is, but it is amazing to see the detail put into making each and every one of these periods and locations unique without ruining the flow and mood of the film. The visual beauty is only complemented by the mesmerizing music that Tom Tykwer, Johnny Klimek, and Reinhold Heil composed for the film.

There are many who will dismiss Cloud Atlas without even watching it, whether that’s due to the Wachowskis’ past few films or it seeming too ambitious, and that is a grave mistake. The idea of souls crossing through lifetimes and endlessly experiencing the beauty of the world is just fascinating, and Cloud Atlas is the kind of film that has you contemplating that while providing a riveting experience.