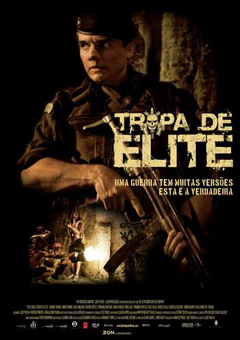 I’m in an unusual spot, having seen Tropa de Elite 2 prior to this one. How do both films compare to each other when watched backwards? They’re mad entertaining with a tinge of social studies. I love it.

In Tropa de Elite, we’re introduced to Captain Nascimiento (Moura) who’s about to leave his days at the Special Police Operation Battalion (BOPE, from its Portuguese name), but before he goes back to his wife and newborn, he must find his replacement — and he’s choosing between rookies Matias (Ramiro) and Neto (Junqueria).

Of course, life isn’t always simple, and the BOPE gets their new assignment to do a criminal and drug dealer clean-up before the Pope arrives, because no politician wants a dead Pope in their city. A lot of killing goes on and a lot of eyebrows are raised.

Tropa de Elite is unapologetic and it’s not afraid to offend anyone — you can just see it in the scene where they are told about the Pope mission and Nascimiento’s voice-over ponders whether or not the Pope realizes that in order to sleep well at night at his chosen favela, so many have to die. And believe me, Pope John Paul II was an awesome Pope. However, the situation painted right there and then is something that we — developing countries’ population — ask ourselves over and over again whenever there’s an important world meeting in our cities. If you are not ready to take it as it is, you probably shouldn’t be holding your meeting here at all.

The film also takes its time to introduce us to BOPE and its incredibly grueling selection process that would intimidate any regular person, like you or me. However deceiving the title of the film may be, Tropa de Elite doesn’t really feel like a mindless action flick about the special service, but a social study of Brazilian society — and maybe overall Latin America and then some — in which we observe the relationship between regular people, people in power, and the people who chose to serve society and protect it.

Tropa de Elite is a film on hypocrisy — the hypocrisy human beings have for other human beings… pointing our fingers at one another for doing something that we on the side, very well knowing, do. All masked under the impression that it’s a butt-kicking action movie. It’s perfect.

Of course, this was labeled a propaganda film [1] by most English-based professional media, even though it was a huge success in Brazil — where some even dubbed it better than City of God. The truth is, they can’t really be compared, but people looking for the artistry displayed in City of God will probably be left a bit disappointed. However, there hasn’t been a recent take on contemporary society that doesn’t rely on metaphoric imagery *cough District 9 cough* in recent memory. Tropa de Elite and Tropa de Elite 2 have done so in an accessible way for regular movie-watching audiences.