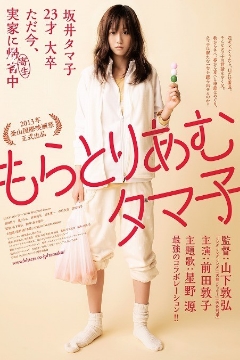 Tamako is indeed in moratorium—a self-imposed one. But from the looks of it, it is starting to inch toward something more. It has already been a few weeks since she graduated from college in Tokyo, but she has shown little to no interest in looking for a job after returning to her provincial hometown. Not a wise move in any situation, but especially when Japan’s ongoing post-bubble economic malaise is taken into account. If anything, she uses it as a crux, and spends most of her time eating, sleeping and reading manga. Her single dad, who runs a sporting goods store from their shophouse—such hybrid spaces were more often seen in classical Japanese films—also has to perform all the household chores, including, in a touchingly funny scene, hanging the laundry of this twenty-three-year-old daughter. But based on her outlook and demeanor, she is really more like thirteen.

Not surprisingly, the only person in town she develops some sort of a kinship with is a junior high student. However, unlike her, he is wise beyond his years. Tamako finally draws the ire of her otherwise kind, understanding dad after one too many quips about Japan’s hopelessness. He, instead, puts the onus on her, which results in a brief bout of staring and shouting. Even if dad is only half-right, he has a point, but he loves her too much to push too hard. As what an adolescent might do, she takes her anger out on her avatar’s opponent in a Street Fighter-type video game. Days pass, then months. Then something unexpected happens: Tamako discovers that there may be another woman in her dad’s life, which rouses her from her torpor.

Although he is known primarily for his wonderful 2005 effort, Linda Linda Linda, director Yamashita Nobuhiro has quietly amassed a formidable body of work over the past fifteen years. His name may not come up when such lists are amassed, but at still only thirty-seven, he is one of the most gifted young filmmakers in the world today. Perhaps the fact that the films are as modest as their author has something to do with it. Nevertheless, few filmmakers have delineated the spirit and mindset of those who refuse to “grow up” with more precision or with as much offbeat, understated humor. Yamashita even gets right the body language and the spaces his subjects inhabit. After venturing out of his comfort zone for a few years, with mostly positive results, he has returned to his favorite theme with his two most recent features, including, as you may have already gathered, Tamako in Moratorium (Moratoriamu Tamako), one of the best films of the year.

An offshoot of season-based commercials Yamashita was asked to make by Music On TV! channel, this quietly perceptive movie is spread across four seasons, which serve as the structural backbone of the film. The relationship between Tamako and her dad subtly goes through various phases as time moves forward. At one point, it even resembles a May-December romance, what with the dad doting on Tamako as if she were his much younger companion and fulfilling her every little whim. It is no surprise, then, that Tamako feels a bit jealous when she finds out about his possible liaison.

Those who would like to see this film as a modernist remake of that little classic called Late Spring (1949) will be disappointed to know that Yamashita had not seen the Ozu effort prior to making this. Although the film will hopefully benefit from any such comparisons, it’s equally fascinating to see it in the light of his early “slacker comedies”—Hazy Life (1999), No One’s Ark (2003), and Ramblers (2003)—a lazy but necessary shorthand, which focused on the travails of awkward twenty-something males who more or less served as the surrogates for the director. This is the first time Yamashita has employed a female to essay such a character.

Wonderfully played by the multi-talented Maeda Atsuko, the former queen of the phenomenon known as AKB48 [1], Tamako is viewed even more sympathetically by Yamashita compared to his earlier protagonists. Appropriately, the overall tone of the film around her is sweeter, gentler. Maeda, who was also part of Yamashita’s 2012 The Drudgery Train, appears to be making a concerted effort to leave behind her previous prim, camera-ready persona; the first time we really see her here she is sitting on a toilet in a disheveled and annoyed state. And she is not above a little self-deprecation: at one point, much to the amusement of the dad, her character even tries to join one of those ubiquitous all-girl groups.

Although this has become one of Yamashita‘s trademarks, Maeda too deserves some credit for conveying much with very little. Her best moment is the reaction on her face upon being casually told that it is time for her to move on. Yamashita is able to render this instance quietly affecting thanks to his unadorned mise-en-scène and editing—simple yet effective long-takes with as little cutting as possible within scenes—which is perfectly suited for a quotidian, slice-of-life story such as this. Moratoriums have seldom been more absorbing.