Case of Hana & Alice, The 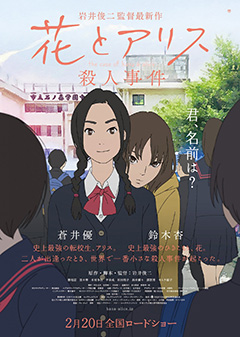 Sequels (or prequels) are tricky because they’ll never be as good as the original (with seldom exceptions), so when Shunji Iwai announced that he’d be making an animated prequel to his teenage girl friendship movie Hana & Alice, I was skeptical.

Animation-wise, I’m not a fan of rotoscoping in general, but all my doubts about The Case of Hana & Alice were dissipated as soon as I propped myself to watch the movie and I saw Arisugawa Tetsuko (aka. Arisu… aka. Alice, once again voiced by Aoi) peeking through the window of her new house, freaking out about the Hikikomori [1] girl, Hana (Suzuki, also back), living in front. It was perfect! Like both hadn’t aged 10 years since the original came out.

The film basically explains how these two became friends, which was briefly mentioned in the first film, when Alice — fresh off her mother’s divorce — starts a new school and hears about the mysterious murder of a guy named Judas (Ryo Katsuji) and his four wives. Peeking her interest, she ventures into the Flower House, meeting Hana, who is possibly the only person that has met the real Judas. Besides SuperAlice, who stands up against bullies, the misadventures with her parents and her wide-eyed curiosity, the film has everything that made Hana & Alice great– Fu makes an appearance, pushing Alice to take up ballet, girly moments of hanging out, and Hana’s train-of-thought and plans that usually make things go out of control, but in The Case of Hana & Alice serves a purpose: they make sense in the context of Hana. She’s never been your run-of-the-mill girl, though she falls in love quickly and is delusional about people’s actions. Despite her strangeness, Alice’s own quirkiness matches her, making them ideal companions. It’s a match made in girly heaven!

Though the animation is oftentimes chunky and the lip-sync often didn’t match with characters speaking, and Iwai repurposes a number of scenes and musical queues (I’d like to think he did it to mirror them), there are numerous enchanting bits and chemistry to let you forget. The animated format also lent itself for more humorous situations, like Alice’s realization of whose house she’s living in, the train schedule problem or the truck incident, which I admit had me laughing out loud.

Iwai also managed to get other cast members to lend their voices in smaller roles, with Aida Shoko and Midoriko Kimura back as the girls’ mothers, Tae Kimura as the ballet teacher, and Tomohiro Kaku, who once played the “amnesiac” love interest of the girls, has a couple of lines as the school’s male teacher. And though Sei Hiraizumi is credited only as being Alice’s father, I could swear he also voices the old man she has a lengthy stroll with, sharing some wonderful childlike moments. However, one of my favorite moments has to be the slow-motion high-speed relay Alice does to reach her father’s cab after bidding goodbye. It concentrates all the emotions, contrasting how Alice had to change her last name to her mother’s (Arisugawa) despite being closer to her father calling him always “Papa” while she calls her mother “Okaa-chan” instead of “Mama“.

Overall, The Case of Hana & Alice delivers for those who loved Iwai’s previous entry and more, avoiding some of the insipid love triangle problems and focusing solely on the unique friendship of the two girls. Maybe an animated style like Windy Tales would have worked wonders, though its style -as of now- makes it easily recognizable for better or worse.

Note 2: Alice’s teacher is played by actress Haru Kuroki, who after winning the Silver Bear for Best Actress at the Berlin Film Festival, had been sometimes compared to Aoi.