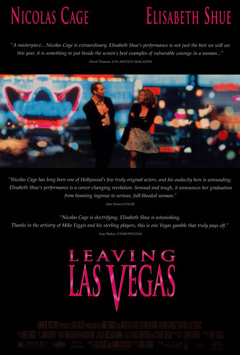 There are stories that despite its hair-pulling qualities, especially considering its subject matter, are sad.

Leaving Las Vegas is one of those depressing stories, following a washed-up Hollywood screenwriter (Cage) with alcohol problems. They’ve taken everything he had, his wife, his son, his connections- out of a job, he decides to leave everything behind to head to Las Vegas to drink himself to death. In his arrival, he meets the nicest prostitute (Shue), Sera, who will accompany to the end of his days.

Though Sera dangerously steps over “dream girl” territory, almost sounding like the perfect companion, I’m kind of glad that she’s at least as bit damaged as Ben is. I mean, sure, she’s a prostitute, with a pimp that’s abused her for who knows how long and it is this abuse that pushes her towards this drunk man, but she’s functional, she even at times seems high spirited and it’s a little too easy for these characters to get together, but their drama feels real. Especially by the end of the film, when you finally see Sera being drawn out for being with Ben, being thrown out of every place they stay in for his behavior. All the rejection, and it gets worse for her.

Nicolas Cage plays the character as Cage drunk. I’ve never really taken too much a liking towards his work, to me it always feels like Cage playing a character convincingly but always as him. In Leaving Las Vegas, he plays a convincing drunk Cage, he’s good at it, but the character itself doesn’t draw any feelings from me. He’s a damaged man, sure, but his desire to drink himself to death and pulling it off, glamorizes it in the saddest context. When it happened, I didn’t felt anything for him, but I felt terrible for Shue’s character.

The most terrible scene, of course, has to be the raping. It’s not close to the worse in graphic raping scenes on screen, but it’s still hard to watch. However, Shue’s best scene has to be when Sera breaks her promise of not asking Ben to change. She’s supposed to accept him and his drunkness, but she reaches a point in which she can’t take it any longer. And thought I don’t necessarily agree that “seeing a doctor” needs to be about Ben checking on his alcohol habit, as it is to check how long it’s gonna take to alcohol poison himself, Shue delivers the line at breaking point.

Mike Figgis script isn’t exactly tight, apparently the raping scene occurs before Sera meets Ben, which would be much more logical with her character development. But I guess a beaten Elisabeth Shue isn’t as appealing on screen for people? It romanticizes the idea and perpetuates the hooker with the heart of gold idea that cinema presents. However, his direction is more apt. He manages to get great performances from his leads, and produces a nice dreamlike atmosphere, despite the repetitive and tiring soundtrack, with the neon lights of the city forming some nice bokeh.

I think Shue may have had better chances in the Supporting Actress Oscar category.