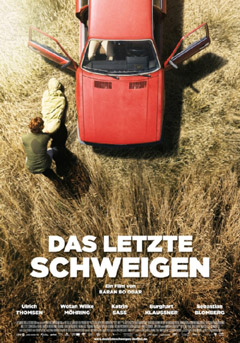 It’s 1986, a young girl is riding her bike through a summer field. A car follows her, a man gets out of the car, rapes the girl and then kills her. The police never find the perpetrator.

23 years later almost the exact same crime takes place in the same field. The people in the small German village fear that the killer has struck again. We follow a group of police officers who try to convince both themselves and the citizens that the girl is still alive, but the retired inspector who was trying to solve the case before doesn’t like how it is being handled. He gets together with a cop who has recently lost his wife – adding a little grief to the story – and they start their own investigation.

The score, which sets the emotional mood of the film, is important for the drama of the story, filled with some surprising moments. The Silence also contains some very fine acting, but it isn’t enough. It’s like a German version of Beck or Wallander, but not as good. The Silence feels like your typical crime movie made for TV, where it should have ended up in the first place – a local TV channel and not at the Stockholm Film Festival.